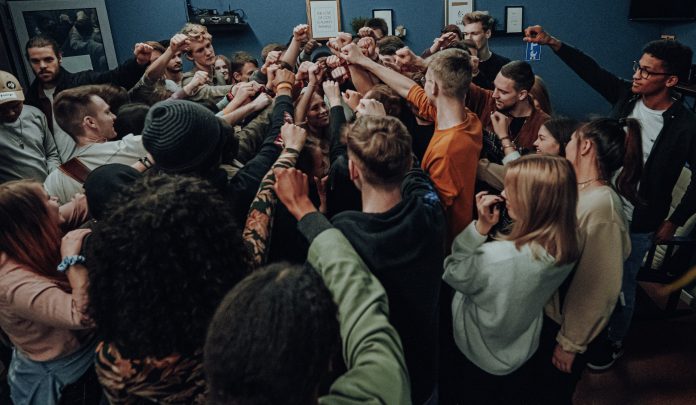 When we talk about discipling the next generation, there are three critical points to consider if you are to make the greatest impact in Gen Z. What’s cool is that these three points are not restricted to youth ministry or to a certain size of a church. They are principles that apply to everyone everywhere.

1. Build a culture that cultivate discipleship. I took over our youth ministry when it had about 50 students in it. In a church of 2,500, we had 50 students. When I took over, we experienced lighting growth about five to six months in. We hit 150. Then COVID hit us. When we were able to meet again, we began to rebuild and just recently we had 200 for the first time. It was something to celebrate!

Now, the truth when I say 200 students were in attendance is that 200 students weren’t all worshipping the Lord with pure hearts. There were some kids that you looked at and thought, “Do you want to be here for the right reasons or just to have fun?” I always want students to have fun and sometimes you get kids that show up just for that, so I prayed in the lobby during service. “Lord, how do kids like these come and really have their lives changed? I don’t think they are coming for the right reasons.” The Lord, in that lobby, put the prodigal son story on my heart, and I realized that son didn’t necessarily come back for the right reason. Still, when he came back, he was swept up into the arms of his father. God said to me, “Geoffrey, what’s the easiest culture to get swept up into here?” I think that’s a good question for all of us in ministry to ask!

Culture is two things: Culture is what you celebrate, and it is what you tolerate. To create the culture we wanted, we had to start celebrating something or stop tolerating something. I decided to beef up our security team. There’s a clear definition of what we won’t tolerate now. At the same time, I built something worth celebrating called “The Core,” and it was basically a Sunday morning Bible study of hand-picked people who were really at church for the right reason. And my whole mission became, “Let’s grow ‘The Core’ this year,” not the crowd. I tell you what, we’re still learning, we’re still growing, its still new, but we have 47 students in “The Core,” and those 47 students have changed the culture of our youth group more than anything else!

2. Learn to cut through the noise of culture. Gen Z has so much coming at them, and they’re so tolerant, they’re open to everything. If they’re going to pick Christianity, then you’re really going to have to show them why is this good news for the world, why it’s good for them! The truth is, as pastors we should be ready and excited to answer that question, like, “I’ve been waiting for you to ask that!”

In “The Core,” this girl named Jaden, she’s awesome. She’s one of my best kids. I don’t know if I can have the best kids, but if I can, she’s one of them! She raised her hand and let me know she didn’t know what to say to a friend at school who’s into stones and crystals and has a religion of “good vibes.” I was like, “A religion of good vibes, huh? Let’s talk about that,” because I felt like it was a good teaching moment. “How is a religion of good vibes good for the world? What does she do when something throws off her vibe?” She avoids it. She avoids negative energy. I told Jaden, “Christianity doesn’t avoid it. Negative energy will come eventually. I hate to say this, but there might be a car wreck or sickness in the family.” I went on to show her and the rest of “The Core” that Christianity teaches us how to deal with negative situations. Jaden took what she learned in our discussion and talked to her friend about it. I don’t know how much headway they made, but I know light was cast in the darkness!

3. Create a space for the next generation to contribute within the church. Students who really fall in love with the Word of God will cut through the culture. The Word is how we will show Gen Z that Christianity is good for them. You can’t do this at a surface level. This is one thing I have got to get better at doing, and it’s something my team and I are working on, to provide avenues for ministry that will allow students who love God to contribute to the ministry in a volunteer capacity. We want to create the same feeling a 16-year-old has when you hand them keys to the car and say, “Okay, it’s yours!” We want to create that real sense of responsibility and ownership within our ministry. Now, that does not mean you create it for just any student. They have to pass the test the same way they have to pass the driver’s test to get their license.

Discipleship in the Bible always entails contribution. You can’t be a true disciple without contribution. Without contribution, discipleship is nothing but consumerism. One of the things that I’m super against is a consumer church because that’s not church. That’s showing up to watch people use their gifts while you sit on the sideline and miss out on everything God wants to do through to you. With our “Core” group, I’m trying to carve out spaces and put leaders over different parts of ministry, deploying them throughout the church to serve on Sundays and Wednesday because the more they contribute, the more they will feel like owners and really do the work.

As youth pastors, we obviously want to please God first and foremost in all we do, but we really want to make our senior pastors proud too. To build an effective student ministry, try putting into play these three principles. And remember: Don’t try to bite off more than you can chew. My first year of youth ministry, my goal was just to have a good-functioning service. It took six years to accomplish that goal! And don’t make the mistake of thinking that the right people aren’t in your church or youth ministry because you haven’t looked deep enough. Everything you need is in your house, your church. As you prayerfully look for the people you need, you will find them! I believe God has already supplied you with all you need.

The Fields Are White for Harvest

Creativity In Ministry: Try to Find Some!

Church Promotion Vanderbloemen Group - August 13, 2022 0
This blog was written by Sarah Meggers, an Executive Search Recruiter at Vanderbloemen. So much happens in the church throughout the year. Small groups, weekly worship...

Inspiration Charles Stone - August 12, 2022 0
I heard a muffled whimper come from the small cardboard box.  When I opened it and carefully cradled the tiny ball of fur, his...

Church Promotion Thom Rainer - August 12, 2022 0
For decades, many church strategies have been built around getting people in the community to come to your church. Big events. Great signage. Social...