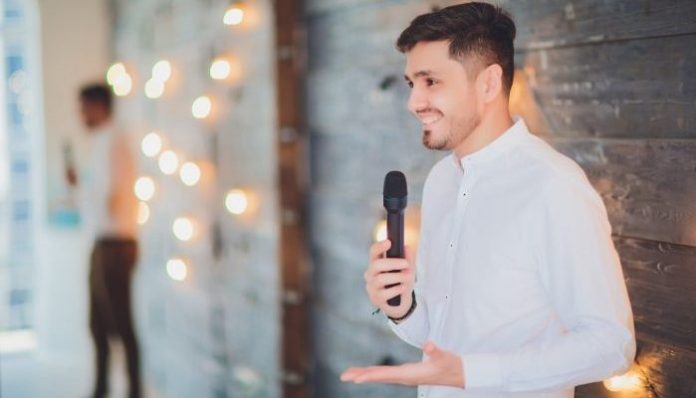 Raising up new communicators can feel like navigating a minefield.

There is a tension that anyone trying to invest in the next generation of communicators feels. On one hand, you want them to get as many reps and opportunities to practice as possible. But on the other hand, you know that giving inexperienced communicators big opportunities can lead to catastrophic results.

Since there is a massive difference between messing up in front of a small group of 15 people and messing up on a major stage, you want to give new communicators as many small opportunities as you can.

But how do you know when a new communicator is ready to take on a major stage?

As I look back on my own development and the development of others, there are pivotal moments when simple lessons went a long way.

There is a massive difference between messing up in front of 15 people and messing up on a major stage.

Here are 4 responses to my early sermons that I needed to hear before taking a major stage:

1. “YOU NEED TO LEARN THE RULES BEFORE YOU CAN BREAK THE RULES”
A mistake many young communicators make is trying to preach with style before they preach with discipline.

I have done this numerous times.

Early on in my preaching career, I thought that as long as my preaching style was great, the audience would love it.

Do you want to know what happened? No matter how many times I tried to preach with intensity, the audience never responded the way I expected.

I never understood how I could be so excited about a message and the audience could look so lost at the same time.

This happened because I didn’t know the rules for effective public speaking and as a result, my “style” broke all the wrong rules at all the wrong times.

I saw what other great communicators did and copied it, but I didn’t understand the “why” behind it.

If you see what great communicators do, you can imitate it. But if you understand the “why” behind their “what,” you can begin to innovate with your own communication style.

The only way I began understanding the “why” was a mentor making me apply discipline before I applied style.

How did he do this?

He created a list of things that a communicator needs to think about every time they speak.

Then, he made write and deliver multiple sermons to him or a very small audience. After that, he would meticulously grade me on every single thing on that list.

If you are looking to teach your young leaders (or yourself) to be a better communicator, try working on your speaking disciplines, not style.

Define the purpose of every talk, and every point within the talk.

Every talk needs to be between 2 and 5 points that are pointing towards one main purpose.

Hook the ENTIRE audience with every opening line.

Build credibility with your audience every time you speak.

Every point, sub-point, and sub-sub-point must be exactly one sentence. No more, no less.
Have a specific purpose behind every story/illustration.

End every sermon with fireworks. [This is usually metaphorical. ;)]

The list was longer, but I wanted to give you an idea of just how strict your standards should be while training.

As I did this for multiple talks, I began to understand how each rule works together, and when and why it’s appropriate to break the general rules of public speaking. I began innovating.

Today, every single one of those disciplines has a clear, logical explanation of why I am or am not doing it for every talk I give.

Young speakers need to learn the rules to break the rules, and someone has to teach them.

If a young speaker doesn’t understand the rules of public speaking, they are not ready to take a major stage.

The person on stage needs to have a deep understanding of whatever they are going to talk about. If they aren’t, why should anyone listen to them?

So how do you know if a young leader has a deep understanding of what he is expected to talk about?
A general rule I follow is this:

So if you can’t have a serious, engaging conversation about the topic with them, they aren’t ready to preach on that topic.

So how do you fix this?

You have deep conversations about the topic with them months before they are set to preach on it.
Give them books to read, podcasts to listen to, and experts in the field to learn from.

After they have done their research, sit down, ask hard questions, and wait for them to come up with good answers.

These will be some of the most formative conversations a young leader can go through. You are teaching them how to learn, think, and articulate their thoughts clearly.

This will take a lot of time, but the young leader that comes out on the other side will be worth the effort.
When you can have deep, engaging conversations about the topic with that leader, they are ready to take a major stage.

3. “THAT WAS ROUGH, BUT YOU’RE JUST BEGINNING”

That sounds harsh, and maybe it is, but here’s the reality:

Everyone who speaks from the stage will deliver a terrible talk. The real tragedy is that not everyone will learn from those terrible talks.

The best thing an influential leader in the audience can do is pull that communicator aside a couple of days later and say:

“Hey, I think you have a ton of potential as a communicator, but I think you could have done better. How do you think you can improve?”

This conversation is key.

This conversation will be painful, but in the long run, that pain is good.

When young leaders feel the pain of failing on stage, we become motivated to do everything they can to never fail like that again.

You have to let us learn from failure on a small platform, so we don’t fail on a major platform.

The journey to becoming a public speaker can be pretty discouraging.

Not only are you signing up to do something that most people are more afraid of than dying, but almost nobody is good at public speaking the first few times they speak.

So young communicators are:

Terrified out of their minds.

Have a long way to grow.

Able to choose to do anything else in the world besides public speaking.

So why do they stick around?

Usually, there is someone in their corner cheering them on and mentioning that they might be called to be a preacher or motivational speaker.

Someone sees potential in them and asks, “Do you think you could be called to this?”

So how do you know if you need to have this conversation?

Passion – Do they deeply care about what they speak on?

Character – Are they someone worth following?

Competency – Are they already good at public speaking?

Just because a young leader isn’t good at communicating now, doesn’t mean they never will be.

Early on, natural gifting to communicate is a “nice to have” but not a “need to have” for potential public speakers.

But they’ll never learn to speak if nobody ever encourages them to try.

The most important asset a young communicator has is a leader cheering them on.

If you are an older leader and see a young leader who is passionate and has good character, consider challenging them to be a voice for what they are passionate about. Their voice is needed.