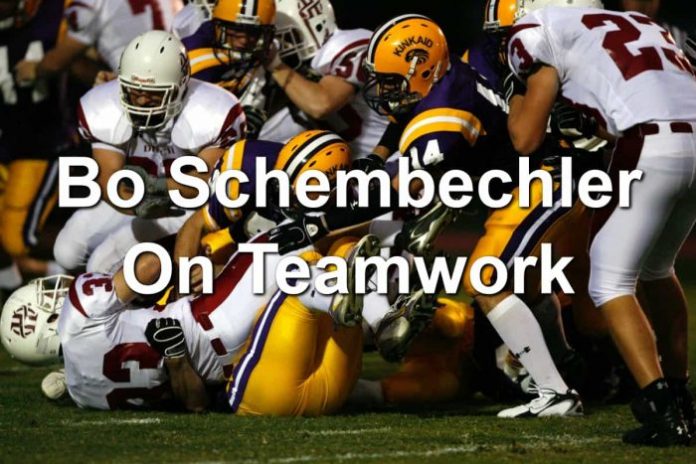 The Chief Operating Officer for the organization I work for recently had the team watch a powerful, moving YouTube video about teamwork. The video was of a speech given by former Michigan Wolverines coach Bo Schembechler.

Bo passed away on November 17, 2006, at the age of 77. Despite being gone from this world, his words on teamwork and teams still live on.

With the NCAA college football season just starting, I thought today would be a great day to share the speech. I hope you take away as much from his speech as I did.

You can view the short clip below. After that, continue reading for my take on Bo’s words on teamwork and how you can apply them to your leadership.

In his speech, Bo Schembechler shared his thoughts on leadership. They are powerful. They are moving. And they are something every leader should instill in his team. Let’s break down parts of his talk and how they apply to you and your organization.

No man is more important than the team.

One of the first things Bo shared in the speech was that no man is more important than the team. Bo is right on this.

It is easy to bring an all-star, top of their game team member onto the team and think this new player needs to be treated special. No, he doesn’t.

Drill this into your mind. No team member is more important than the team as a whole.

No coach is more important than the team.

A leader will guide and direct an organization. Does this make him more important than the team? No, it doesn’t.

No coach is more important than his team

The leader plays an important role in the team. He is the one who will determine where the team goes. He determines who comes and goes from the team. But this does not mean he is bigger or more important than the team.

One day the leader will leave. Another will take his place. He is not the team.

You take into consideration what effect does it (your actions) have on my team.

I loved what Bo said here. He knows that when team members and leaders don’t consider themselves more important than the team, they will consider how their actions will impact the team.

We’ve all seen the impact improper actions from leaders have had on an organization. The downfall of Enron. The way people the position of President after President Trump’s vulgar remarks. Or any other situation you can think of.

Your actions will affect your organization. Make sure you’re doing right.

Coach Schembechler had faith in his team. He believed they could win championships. His belief didn’t come from his ability to lead.

Coach Schembechler believed in his team because he knew they were going to play as a team.

You can believe in your team as long as they’re working together as a team. Help your team become unified. Help them to see each other as partners instead of adversaries.

When your team begins to work as one, they can do anything.

Coach Schembechler’s closing remarks were about believing in each other. In encouraging one another. In speaking well about each other.

Wow! Do you have a team that embodies what coach Schembechler said his team was going to do? Could you imagine if you did?

Teams that decide to believe in each other, to speak the best about each other, to encourage each other will be a winning team. Team members will want to work together. They will believe everyone has their best interest at heart.

All of this will encourage them to work harder and better.

Create a team that is willing to talk well about one another and encourage one another.