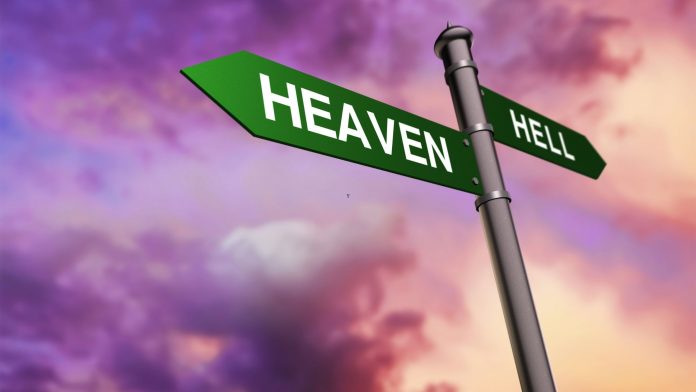 As we enter the month of May, I want to stir within you the sobering reality of our responsibility to tell the world about eternity. How serious this issue is, yet the Church as a whole has failed to warn the world of eternity and it’s reality. It is guesstimated that there are 6.5 billion people in the world and 150,000 die each day. How many leave this world and enter the next prepared? It is a matter of Heaven and Hell! John Chrysostom once said, “The pains of hell are not the greatest part of hell. The loss of heaven is the weightiest woe of hell.”

Embracing Our Responsibility to Reach Lost Souls
In Mark 16:15-16, Jesus declared, “And he said unto them, ‘Go ye into all the world, and preach the gospel to every creature. He that believeth shall be saved; and he that believeth not shall be damned’.” The Message Bible declares, “Go into the world. Go everywhere and announce that whoever refuses to believe is damned.” Have we become so comfortable in our nice houses and nice care and pleasures of life that we have forgotten our charge to go to the lost? In Matthew 7:13 Jesus said, “Enter by the narrow gate: for wide is the gate, and broad is the way that leads to destruction, and many there be which go there at.”

Jesus Came to Call Sinners to Repentance
In Matthew 9:12-13 Jesus said to the Pharisees, “But when Jesus heard that, he said unto them, ‘They that are whole have not need of a physician, but they that are sick. But go ye and learn what that meaneth, I will have mercy, and not sacrifice: for I am not come to call the righteous, but sinners to repentance.” In Luke 19:10 Jesus defined the focus of his mission, “For the Son of Man came to seek and save that which was lost.” The TCNT declares, “…to search for those that are lost and to save them.” If that was His assignment, shouldn’t it be ours as well? Statistics show that only 7% of all believers have ever led someone to Jesus Christ. Could it be we have lost sight and compassion for other’s eternal destination?

Heaven or Hell?
Winston Churchill once said, “You can trace the downfall of London to when preachers stopped preaching about hell.” In Mark 8:36 Jesus said, “For what shall it profit a man, if he gains the whole world, and loses his soul?” The world is trading their souls for the temporal, forfeiting eternity with God. We have to waken men and women to the sobering reality of Heaven and Hell! Hell was never prepared for mankind, but for Satan and his fallen spirits. Peter Kreeft once said, “The national athem of Hell is, ‘I Did It My Way.’” CH Spurgeon once said, “I would rather pluck one single person from the fires of hell, than to explain all the mysteries of Christ.”William Booth’s Salvation Army motto was, “Go for souls, go for souls and go for the worst one.”

Winning Souls is the Greatest Fruit of the Righteous
Proverbs 11:30 declares, “The fruit of the righteous is a tree of life; and he that winneth souls is wise.” The Amplified Bible declares, “The fruit of the (uncompromising) righteous is a tree of life, and he who is wise cpatures human lives (for God, as fishers of men – he gathers and receives them for eternity).” Leonard Ravenhill once said, “Could the mariner sit idle if he heard the drowing cry? Could the doctor sit in comfort and just let his patients die? Could a fireman sit idle and let men burn and give no hand? Can the Church sit at ease, with the world around them damned?”We have a great responsibility to share the gospel that saves men’s souls from the fire of Hell. People are the fruit we bear for eternity, as we lead them to Christ.

I want to personally thank you so very much for your friendship, pray