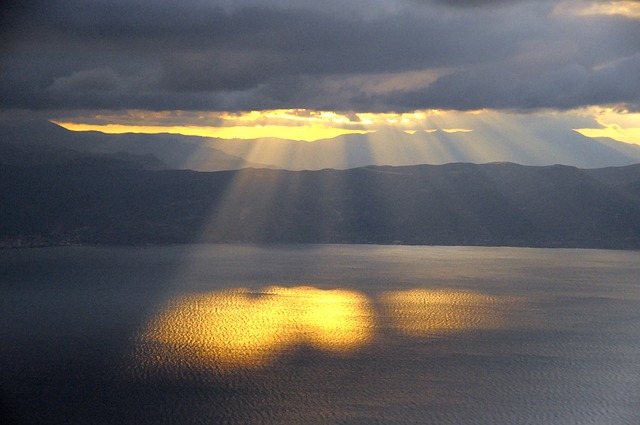 “But for the cowardly and unbelieving and abominable and murderers and immoral persons and sorcerers and idolaters and all liars, their part will be in the lake that burns with fire and brimstone, which is the second death.” (Revelation 21:8)

Numerous biblical texts stop me in my tracks and leave me gasping for air. None intrigues me more than this one in its announcement that cowards don’t make it to Heaven.

The fearful go to hell.

That clearly takes some explaining.

Some translations say the timid or the fearful.  I suspect someone somewhere reads that and thinks, “Man–they send you to hell for being shy? Who knew?”

It’s been said about those who settled the Old West that everyone was strong. The weak didn’t survive the trip and the cowards never started in the first place.

In the margin of my Bible above Revelation 21:8 is my scribble: Look who is leading this sad parade into hell!

The cowardly. The timid. The fearful.

This brings to mind the Lord’s Parable of the Talents in Matthew 25.  A wealthy man leaving on an extended trip calls his servants in and entrusts varying amounts of money to each. To one he gives five talents (perhaps a thousand dollars in today’s currency), to another two and to a third he gives one talent. He did this, Jesus said, “according to the ability of each one.”

On his return, the master called in the servants for an accounting. The first two had done well. But the third, the servant given only one talent, had an alibi.

“Master,” he said, “I knew you to be a hard man. You reap where you do not sow. You gather where you scattered no seed. And, I was afraid.”

“I took your one talent,” he explained, “and hid it in the ground.  So, here it is. You have back what is yours.”

The servant was patting himself on the back for his conservative ways (“No risk for me, no sirree!”), his knowledge of his master, and his safekeeping of the master’s treasure.

The master had a different view on it altogether.

“You wicked, lazy slave,” he said. “You knew that I reap where I did not sow, and gather where I scattered no seed.  You ought to have put my money in the bank. Then, at my return, I would have received my money back with interest.”

The master commanded that the one talent be taken from the coward and given to the servant with ten talents. The coward was then kicked off the team. (Matthew 25:14-30)

The nature of cowardice: What it does

Cowardice paralyzes.  It freezes you into inaction. In crime-ridden cities, often people are afraid to speak up, to tell police what they have seen, to take a stand against wickedness.  In business operations, a coward will see something unethical taking place but keep silent lest he be singled out for mistreatment.  In wartime, a coward will sometimes desert his buddies.

Cowardice prevents you from doing the most important thing in this life: confessing Christ. Pastors see it all the time. People say, “You know, my mama went to a church of another religion and I wouldn’t want to hurt her by joining yours.”  Or, “I can’t be a Christian, not with the job I have.  My job requires me to be tougher than the people I deal with. So, this is not for me.”  Or, a popular one is, “I could never confess Jesus and be baptized in front of all those people.”

Jesus said, Whoever is ashamed of me and my words in this adulterous generation, of him the Son of Man will also be ashamed when He comes in the glory of His Father with the holy angels (Mark 8:38).  This is serious stuff, friend.

Cowardice results from a wrong focus. The fearful one has eyes only for the opposition, not for his own resources.  We think of the cowardly spies who returned from Canaan with their disastrous report on the land Israel was about to enter. The land through which we have gone, in spying it out, is a land that devours its inhabitants. All the people we saw in it are giants. We became like grasshoppers in our own sight, and that’s how they saw us, too! (Numbers 13:32-33)  No one would be moving into Canaan that day. The report of the cowards panicked the people and shut down all forward movement.

The minority report that day, delivered by Caleb and Joshua, agreed about the giants and the walled cities and standing armies. However, their focus was different. The land which we passed through is an exceedingly good land. If the Lord is pleased with us, then He will bring us into this land and give it to us…. Only do not rebel against the Lord, and do not fear the people of the land, for they shall be our food (Numbers 14:7-9).

Cowardice fears faith, and is threatened by it.

Caleb and Joshua continued their summation with an altar call:  Their protection has been removed from them, and the Lord is with us. Do not fear them. The next sentence is revealing: But all the congregation said to stone them with stones. (14:9-10).

You see it in church from time to time.  Those who are fearful of the economy, fearful of Washington, D.C., fearful of the IRS, fearful of the future and fearful of fear itself, grow enraged when some saint arises in a business meeting to say something like, “Well, I feel like if the Lord is in this project, He will provide and we need to go ahead with it.”  The (ahem) real-worlders, those who see the faith-people as idealistic simpletons, shake their heads and scoff at such notions. (May I add, I’m not dreaming this up.  I have been there with these bankers and others, and have the scars to prove it. No church should ever put faithless people in leadership position simply because of their expertise in some area.)

Without faith it is impossible to please God (Hebrews 11:6).

Cowardice must be attacked at its base: one step forward and it dissipates.

I saw this as an 11-year-old in a small Free Will Baptist Church in rural Alabama. As the congregation sang the old gospel song, “O Why Not Tonight,” everything inside me was crying out to step forward and give my life to Jesus Christ. However, my feet were glued to the floor. Finally, by sheer force of will, I picked up my feet and stepped into the aisle.

The first step was all it took. The Lord took all the rest for me. I glided down that aisle, knelt there to pray and receive Jesus Christ, and later, floated out of church.

The only step I took that night was the first one.

Cowardice is cowardly.  It gives up quickly.

Face the fear and move against it and the timidity disappears.  You go literally from “faith to faith,” as Paul put it in Romans 1:17.  Just as fear feeds off fear, your faith builds with each step of faith.

Fear and faith cannot coexist.  One will crowd out the other.

“Why did you fear?” The Lord asked the disciples who had awakened Him to calm the stormy sea. “Where is your faith?”

Fear and faith are opposites. They are choices we make every day. They cannot coexist. (Well, not for long, anyway.)

The temptation to fearfulness never goes away. We may revert to cowardliness at any moment.

We have to be vigilant at all times. We have to surrender ourselves anew to the Master every day. And we have to stay in the Word since “faith comes by hearing and hearing by the Word” (Romans 10:17).

We must always be taking steps in resistance to the conservative, timid, fearful forces which never give up and never go away.  The Holy Spirit will never cease calling on us to move out, move up, and move it!