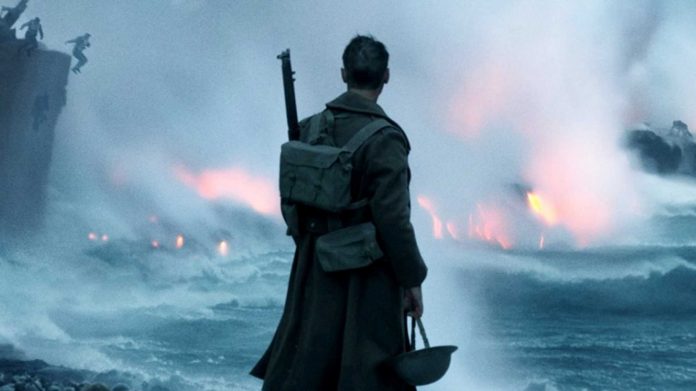 Christopher Nolan is back with a tale from World War 2. Dunkirk tells the story of French, Belgian, and British allied soldiers surrounded by the German army. Their evacuation was intense and the focus of Dunkirk.

Dunkirk is receiving praise from critics and moviegoers alike. People are loving what Christopher Nolan has offered up in Dunkirk.

Me? Not so much. I found Dunkirk to be entertaining but shallow. Normally the shallowness wouldn’t bother me but for such an epic evacuation, I felt the story deserved more.

Leadership Lessons And Quotes From Dunkirk

1. Leaders need to give hope:

Dunkirk opens with a text introduction. The viewer learns what has happened.

British and French forces were forced to the beaches of Dunkirk. There, they were waiting (and hoping) for a safe evacuation.

That hope of home is what kept many of the soldiers going. They wanted to get home so they could fight another day and see their loved ones.Leaders give hope – Leadership lessons from Dunkirk

Hope gave them something to fight for.

Hope will do the same for your team. Helping your team find hope will give them a reason to pursue the vision.

Give your team hope to keep them going.

2. Let your identity be known:

Tommy (played by Fionn Whitehead) was being pursued by the enemy. Two of his friends were mowed down by gunfire. He was able to escape and run towards an Allied Forces barricade.

As he approached, the Allied Forces opened fire. They weren’t sure of who he was. Tommy had to duck behind cover. There, he identified himself as English.

When the Allied Forces heard he was English, they let him through.

Leaders need to let themselves be known. You have to speak up and identify yourself. You need to let people know who you are and why you are there.

By identifying yourself, you’re letting your team know what to expect.

Keep an eye on that gauge. Save enough to get back.

Three fighter pilots were flying to cover the evacuation. One of the pilots told the other two pilots to check their fuel gauges. After their report, he told them to keep an eye on their fuel gauges. Those gauges would tell them when they were out of fuel. And they needed to return to a refueling station before they ran out.

Leaders need to keep an eye on their fuel gauge too.

You can only do so much before you run out of the fuel that keeps you going. You need to find ways to refuel.

Whether you need to increase your physical activity, take a sabbatical, or eat healthier, you need to watch your fuel gauge. If you run out, you’ll burn out.

As Tommy and another soldier were carrying an injured man to a ship, the boardwalk they were walking on was damaged. There was only a thin board they could use to cross the gaping hole.

The soldiers on the other side of the hole encouraged them to run across. When they did, they made it across. And then the cheers erupted.

The other soldiers were excited to see the men make it. They celebrated with hoots and hollers.

You need to be like the soldiers who cheered Tommy and his friend on. You need to cheer for your team when they see success.

By being a cheerleader for your team, you encourage those you’re leading. They know you’re for them, not against them.

Let them know you’re behind them!

5. Sometimes you have to continue on:

I’d mentioned the three fighter pilots earlier. One of those fighter pilots was shot down and crash landed in the ocean. The two remaining pilots couldn’t do anything other than record the position of their downed ally and continue towards the evacuation area.

While it sucks, you will find yourself in a position where you have a choice. Go back and do ineffective work or move past the defeat and continue towards the vision.

The choice isn’t always easy but you have to make the choice.

He’s shell-shocked George. He’s not himself. He may never be himself again.

Mr. Dawson was the captain of a boat called Moonstone. She was a small, personal vessel the military called in for part of the Dunkirk evacuation.

The Moonstone came across a downed pilot who was shell-shocked. He wouldn’t speak. He wouldn’t interact with those on the boat. And he wouldn’t eat or drink.Tend to your team’s needs – Leadership lessons from Dunkirk

Mr. Dawson realized the soldier had trauma. He, his son, and another boy (George) would have to be aware of the soldier’s condition.

You’re going to have damaged team members. People will come to you with their personal and business baggage.

Discovering what is wrong with the team member will be crucial in how you deal with them. Seek to understand their issues and whether or not you can help them move forward.

In one scene in Dunkirk, you see soldiers eating happily on a boat. They believe they’re safe. They’d left the shores of Dunkirk, after all.

That’s when reality hits them. And a torpedo.

Business may be going well. You may be thinking you’ve got it made. It’s smooth sailing from here on out.

You find out someone has been embezzling from the business. A valuable customer goes out of business. Or you’re let go.

Feeling safe doesn’t mean you are safe. Be prepared for the worst.

Mr. Dawson is approached by the shell-shocked soldier. The soldier tells Mr. Dawson they have to turn the boat around. They need to get away from the beaches of Dunkirk.

Knowing they have a mission, Mr. Dawson tells the soldier “No.”

Mr. Dawson knew his duty. He was to go to Dunkirk and pick up any soldiers that needed to be evacuated. That was his mission.

When you give your team a mission, they know what they need to do. Give them a clear mission!

The same shell-shocked soldier freaked out after being told no. He began arguing with Mr. Dawson, Peter, and George. His fear caused him to act irrationally and attack the people who were trying to help him.

In the scuffle, the soldier pushes George down the stairs. We see him laying at the bottom of the stairs, bloody and mumbling incoherently.

The fear of the soldier caused him to do things he shouldn’t have.

Fear does that to us. When you begin to fear, you act in ways you normally wouldn’t. Fear makes you act irrationally.

Evaluate whether or not you should be fearful. Then take action.

10. Everybody wants to be important:

George, while on the ground, is approached by Peter. Peter begins to comfort George. That’s when George tells him something important.

George wanted to do something of worth. He wanted to make his father proud. And he wanted to be in the local newspaper.

You have the responsibility of helping those on your team to feel important. You have the power.

Find ways to help your team members to shine. And let them.

An unnamed soldier told another soldier they should go to the big destroyer boat. They would be safer there.

The other soldier realized the folly of this thought. The big destroyer was a target for the bombers overhead. Those bombers could easily drop a bomb on the ship and they would be dead.

Rather, the soldier wanted to take his chances in the small boat and the waves at the shore. There was less risk in getting to shore than there was being in a big boat.Know the risks you’re facing – Leadership lessons from Dunkirk

Do you know what you’re about to face? Have you calculated all of the risks involved in your next business move?

Begin looking at the risks of each move you’re making. See any issues? Begin making corrections before you move forward.

A group of soldiers came upon a beached boat. They saw this as an opportunity to get onto the open water and away from the enemy.

But there was a problem. They couldn’t get the boat into the water until the tide rose. This meant they had to wait.

Waiting is never fun or easy. Waiting makes you feel uncomfortable. Like you need to be doing something.

In reality, waiting is okay. Waiting means you’re resting or evaluating or taking the proper amount of time to get things done.

Don’t be afraid to wait.

This can be jarring at first. Yet Dunkirk ties each of these time periods together at the end of the movie.

Leadership can be disorientating. You may not understand why things are happening when they’re happening. Yet you’ll discover every event in your leadership journey ties together.

I’m staying… For the French.

The rear admiral helped load the last soldiers onto the boat. Then he tells his men he’s staying. He needs to help more soldiers. He needs to make sure the French are able to get off of Dunkirk.

Great leaders don’t leave people behind when they can help it. They’re willing to stay behind and help get the rest of their team going.

Be willing to stay.

15. You don’t need to be a big-time leader to be effective:

Many of the larger vessels used in the attempt to rescue the 400,000 allied forces soldiers proved to be ineffective. The enemy would sink them with bombs.

Yet something really cool happened. The smaller, personal boats were able to get to the shore, have the soldiers loaded on, and then take them to safety.

The personal boats weren’t the biggest or the best. They were effective.

You may think your leadership platform isn’t big enough. You don’t have enough followers or influence.

I believe you’re wrong if you’re thinking this way. You don’t need to have a huge platform or more followers.

16. Your leadership style isn’t for everyone:

Dunkirk has received huge critical praise. Some are even saying Dunkirk is the best war movie ever.

I’d disagree with these critics and fans. I’m evening disagreeing with good friends of mine.

I found Dunkirk to be hollow.Your leadership style isn’t for everyone – Leadership lessons from Dunkirk

It was hard to follow who was who. I didn’t find myself caring for any of the characters other than George. I had trouble understanding what characters were saying.

Overall, the movie didn’t do anything for me. Yet Dunkirk is stirring emotions in others.

Dunkirk wasn’t for me. But it may be for you.

Find that one and lead them well.