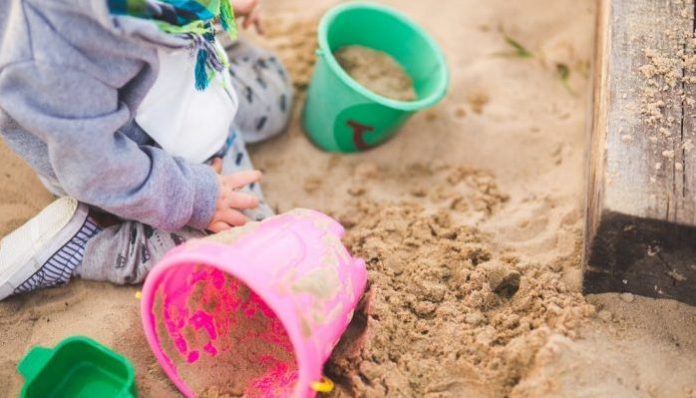 This morning I dropped Weston off for his first day of preschool.

Let me tell you what may have just happened to every school-aged mom who read that sentence.

Immediately your senses flooded with the gamut of emotions you felt the first day you dropped your kid/s off at school. How is it in one moment you can simultaneously beam with pride, lament how fast he’s growing up and how time seems to be slipping away from you, and grimace in pain as nervous knots tie up your stomach while you wonder how he’s going to do?

I didn’t think I’d feel much emotion dropping him off. Up to this point, preschool seemed like a convenient baby-sitting plan where he’d happen to learn some social skills and develop an understanding for letters, language, and maybe a little problem solving. I truly didn’t anticipate feeling what I felt as I dropped him off at his classroom this morning.

Maybe I was distracted by the hurriedness of the morning at home. Perhaps it was waking him up uncharacteristically early, the stress of picking out his first day of school outfit to create the perfect Pinterest moment that distracted me. Maybe it was the melt down that ensued when I tried to get him to take the iconic “first-day-of-school” picture on the front porch. Maybe it was the terrifying memory of what happened the day before at the hour-long parent open house. (I pulled him out of his car seat when we arrived to discover the whole front side of his jeans soaked with pee – It looked like he had busted a water balloon in his lap) I certainly wasn’t going to let him walk into this new school for the first time looking like a Goodwill model so naturally I had packed a couple extra outfits for a time such as this. Here I was stripping my son down to nothing in the middle of the parking lot while parents, whom I was sure had their kids completely potty trained and reading Henry James by age three, passed by me to enter the building. (Of course, he peed through two more outfits that morning in the one hour we were there).

So, maybe it was the busyness of bribing him with fruit snacks to keep his pants dry the entire commute to school that dammed up my emotions. Or maybe it was the pressure of getting to the front of the picture booth line they had setup at the school entrance knowing that he had already vehemently resisted one picture that morning.

Whatever the reason may have been, the moment crept up on me. You know what I’m talking about. The moment.

We got into the classroom and we put his “check-in” stone with his name on it in the designated basket. I dropped his book bag off in his cubby, ushered him to the bathroom for one last potty attempt, helped him wash his hands and then crouched down to hug him goodbye.

I looked into my little 3-year-old-going-on-30’s eyes and said, “Hey buddy. You’re going to have a blast today.”

“Yeah,” he said back to me with a huge grin on his face.

“I wuv you too, daddy.” He gave me a big hug and with that he bounded away to join another little boy at the blocks station.

It hit me. Every suppressed emotion that had been carefully hidden by the activity of that morning rushed forward and tried to seep from my pores as I watched him sit down to meet one of his many new friends. I turned back toward the door and started exiting to the hallway without saying anything to his teachers. I couldn’t let them see the mist in my eyes.

Before my feet could hit the hallway I began to worry: How will he do? What will the teachers think about him? What will his classmates think about him? Will they include him? Will they tease him if he wets his pants? Will he get along with the other kids? Will he be okay in this new environment without me? Will he develop and learn as a normal kid? Will he be gifted or will he have a learning disability? What happens when kids (and parents for that matter) find out what happened to his Mommy. What will people say to him? What will people say about him?

You see, for the last almost two years since Amanda’s passing, I’ve felt the sole responsibility for making sure Weston is safe and developing in a healthy manner—or as normal as can be for a kid who lost his mom at fifteen months old. Certainly I’ve had a lot of help, but all from people who loved Amanda, love me, and love him. Now I’m relinquishing him into a stranger’s care, releasing him into a cruel dark world where there is so much potential for hurt, shame, embarrassment, ostracizing, marginalizing, and teasing. Now he’s exposed. Now he’s vulnerable. And I can’t swoop in to rescue him.

I’ve heard it said that as your kids grow up your role as a parent in their life must move along the spectrum from control to influence. Now as I dropped him off at his first day of preschool, I could feel the little ticker on my parenting spectrum move one notch away from control—and it terrified me.

As I walked toward the exit door of the classroom, I glanced to the left through the glass windows that look out into the hallway. A cute young couple, Chris and Victoria, were waving goodbye to me. Their four-year old, Jude, was in Weston’s class and as I waved back it struck me. Somehow the significance of this couple’s presence had been lost on me.

The day before at the open house, I walked into a room full of chatting adults and wondered if I was the only new parent who didn’t know anyone in this school community. I grabbed a cup of coffee and began meandering around the room to scout for someone who looked like they needed a conversation buddy too. Here I was learning how to help my son get adjusted to a new school environment and I felt like the new kid in a new town attending a new school.

As I circled around the room I heard a voice in front of me, “Davey?” It was Victoria.

“Hello?” I responded searching her face for a memory of some sort. Had I met this girl before? How did she know my name?

“My name’s Victoria. We go to Trader’s Point Church—where Amanda’s celebration of life service was. My husband and I have been following your story since the beginning. My little boy, Jude, is in Weston’s . . . uh, it’s Weston right? Weston’s class.” No matter how many times it occurs in a given week, I’m still taken aback when I meet a random person who has been following our story.

I nodded and smiled as I responded, “Oh wow! It’s great to meet you! Thank you so much for your support and your prayers. It truly means the world to us!”

I MUST NOT HAVE BEEN READY FOR WHAT WAS COMING NEXT.

“Yeah, I believe you would have met my husband, but you may not remember him. His name is Chris and he’s a Sergeant for the IMPD—the police department. He was one of the officers who responded to your 911 call the morning Amanda was killed.”

Maybe I’m growing too accustomed to running into people who are connected to our story, because while I thought that was certainly cool and even a bit providential that this family happened to be in the same class as Weston and I, the significance didn’t hit me until the next day as I’m dropping Weston off from school and Chris, Victoria and I walk our boys down the hallway together.

Here in the same classroom as Weston and me was this activist family, these protectors of our city, who stood as a symbol of safety and the front lines of response to crisis. Whether it’s a city-wide crisis or a very personal like the one that invaded my home on November 10th, 2015, Chris and Victoria show up when people need protection. Maybe no one else at Weston’s school would see them as a symbol, but this morning as I was wrestling with feelings of my son’s little life slipping out from under my grip, I certainly did.

It was that little “hug” from God I needed this morning. The reminder that He’s not just in our story, but he’s writing and weaving a beautiful narrative. That he’s got everything in his control, especially the things that are out of our control. He reminded me in that moment that anything that seems over our heads is still under his feet and that I can trust Him with Weston’s future. That he is the ultimate author, perfecter, and PROTECTOR of both our faith and lives.

As I watched Chris and Victoria walk down the hallway, I looked back at Weston. By this time he had migrated to the play dough on the table near the front of the room. A big smile was plastered on his face as he rolled the dough back and forth.I FELT A STILL SMALL VOICE WHISPER TO MY SOUL, “DAVEY. I’VE GOT THIS. TRUST ME.”

The Scars Tell the Story on Us