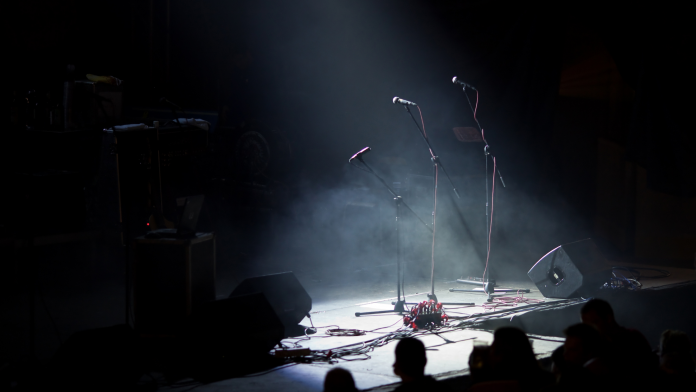 In his book, Everybody’s Normal Till You Get to Know Them, John Ortberg makes a confession. You get the impression that it was not easy in coming. (The story is dated because the book was printed ten or more years back.  It’s still a great story.)

The church where I work videotapes most of the services, so I have hundreds of messages on tape. Only one of them gets shown repeatedly.

This video is a clip from the beginning of one of our services. A high school worship dance team had just brought the house down to get things started, and I was supposed to transition us into some high-energy worship by reading Psalm 150.

This was a last-second decision, so I had to read it cold, but with great passion: “Praise the Lord! Praise God in his sanctuary; praise him in his mighty firmament!” The psalm consists of one command after another to praise, working its way through each instrument of the orchestra.

My voice is building in a steady crescendo; by the end of the psalm I practically shout the final line, only mispronouncing one word slightly:

“Let everything that has breasts, praise the Lord.”

Ortberg tells what happened next.

A moment of silence. The same thought passes through four thousand brains: Did he just say what I think he did? In church? Is this some exciting new translation I can get at the bookstore?

Then, everybody in the place just lost it. They laughed so hard for so long, I couldn’t say a thing. It was zygomatic. I finally just walked off the stage, and we went on with the next part of the service.

I have been teaching at that church for eight years. Of all the passages I have exegeted and all the messages I have preached, that is the one moment that gets replayed before conferences and workshops. Over and over.

In fact, in my humble opinion, the power of that moment was so strong, it would have been worthwhile for him to have planned the flub.

I sometimes say to friends, “If you ever find yourself sitting among two or more preachers and want to get something started, ask about their most embarrassing moments. Every preacher has had a dozen. And some are pretty hilarious.”

Ortberg says: “Sometime ago a psychology journal published an article entitled ‘The Effect of a Pratfall on Increasing Interpersonal Attractiveness.’ The surprising conclusion: ‘Seeing someone you admire do something stupid or clumsy will make you like him more.’”

Part of the reason for that is we do like our leaders to be human and to show their humanity from time to time.

Now, we know they’re human. The problem comes when they don’t seem to know it.

Earlier in the same chapter, Ortberg writes, “A friend of mine says that one of the hardest things in the world is to be right and not hurt anybody with it. If you have any doubts about that, remember some time in school when you sat next to the smartest kid in class. Did you enjoy it? Being right (or more precisely, having the need to be right) is a terrible burden. An amazing thing about Jesus is that he was always right and never hurt anyone by it.”

I’m thinking of two churches I pastored, one in the 1970s and the other in the 1980s. In the first, we had a lot of laughter in church. It was the spontaneous, unplanned kind from things that happened on the spur of the moment. The congregation grew to love the staff and they still talk about the four men who led the church through those years as some of the best.

The church of the 1980s, however, knew very little laughter. Looking back, I’m not sure why that was. Perhaps it was the tension among the leadership that eventually resulted in several of us departing earlier than we had planned. It may have been a factor of the architecture of the sanctuary, with the congregation sitting far removed from the staff. Maybe it had something to do with the staff of the 80s being new and the staff of the 70s church staying for many years.

To this day, the church of the 70s speaks of their church staff with fond remembrance. The church of the 80s, I wager, can hardly even remember who their staff was back then.

My friend Windy Rich had spoken at North Carolina’s Ridgecrest Conference Center all that week, then on Sunday morning caught a plane back to Nashville, arriving just in time to change clothes and rush to church. That’s when he found he was on the program to read Scripture. He glanced over the text, saw no hard words, and confidently waited for his time at the podium.

Like John Ortberg, Windy did fine, until he came to the very end of the text. Luke 14:11 came out this way:

A Freudian slip, I think we could say.

Pastors know–or learn the hard way–to always read over the assigned readings in advance. Preferably, they will do so several times. The idea is to get the tongue used to forming those syllables in that particular order. In doing so, they may find out something else: the tongue has a mind of its own. So, they want to make this discovery in advance and protect themselves from such goofs.

It could be they will want to make such a slip-up, just for the delight it gives the congregation.

Question: did you look up ‘zygomatic’?

I did. And didn’t get a lot of help from Webster. The zygoma is some kind of bones in the skull near the face. I gather that Ortberg is saying they laughed so hard, their faces hurt.

Ever done that? I have, and I have been the butt of such laughter too.

This one is harder to relate because it was rather involved.

As the newest and youngest minister on the staff of the great First Baptist Church of Jackson, Mississippi (the church Bertha and I belong to now), I was invited to bring the devotional for the annual retreat of the most prestigious Sunday School class in the church. These men and women were a hundred or more strong and easily ranked among the movers and shakers of our state. They met at the Ross Barnett Reservoir at the edge of the city, had a great time of fellowship and supper, and then settled down for a time of inspiration. Just before I was to speak, the church’s elite youth ensemble presented a mini-concert.

Then, the musical program over, the singers took the applause and stepped to one side. I walked to the microphone and began to speak. I had not gotten one sentence out when I became aware that the singers were dismantling the sound system all around me. They were unplugging amps and packing microphones and folding music stands–under my feet, in front of me, off to both sides.

No one was watching me and no one heard a thing I was saying.

Being young and relatively inexperienced, I was completely clueless as to what I should do. My befuddlement, however, made the moment priceless.

The pastor, Larry Rohrman, was on the front row with his wife and enjoying my distress. In fact, the more perplexed I became, the more tickled he got. Finally, he was rolling on the floor–we’re talking literally, not this rofl business!–and the entire group was in stitches.

Poor me. I was so young and insecure, I did not know how to enjoy the moment with them. I just stood there embarrassed.

Which may have been the best thing I could have done under the circumstances. Because the members of that class, all of whom were old enough to be my parents, came to my rescue. Even though they were laughing until their faces hurt (zygomatically?), their hearts went out to me. From that moment on, for the full three years I served that church before moving on to pastor the First Baptist Church of Columbus, Mississippi, those people were some of the finest friends I would ever have. Some remain so to this day.

People like to see their leader discombobulated. It does him good to humble himself and does them good to see it.

Someone once said of his preacher, “My pastor’s not always right, but he’s never in doubt.”

I say that pastor is in serious need of a comeuppance moment, a time when he goofs publicly and lets people see his humanity. Of course, it would be best if he would react with grace and laugh along with them. But even if he can’t, so long as he allows them the freedom to tease him about the slip-up, all is well. In the long run, it may be the best thing he could ever do for his relationship with his people.