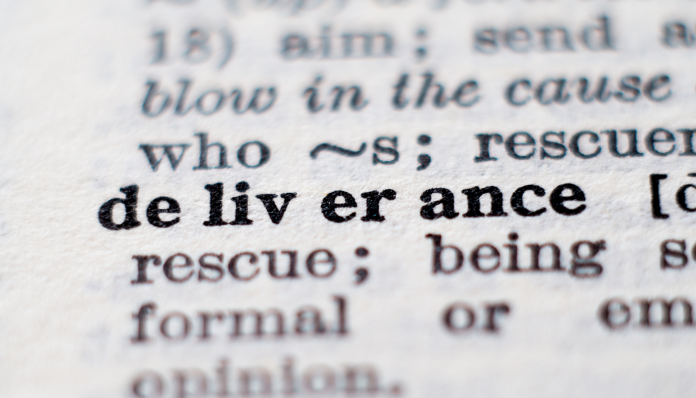 43But when the unclean spirit has gone out of a man, it roams through dry [arid] places in search of rest, but it does not find any. 44Then it says, I will go back to my house from which I came out. And when it arrives, it finds the place unoccupied, swept, put in order, and decorated. †

This should make us so mad. Just think of it. The devil calls our body his house. It’s not his house, it’s Jesus’ house. Our determination to walk in obedience with Jesus Christ, stay filled with His Spirit, and keep our mind filled with God’s Word has to be strong. We must be resolute that these demonic spirits cannot live in our soul ever again. Determination to be obedient, holy and vigilant are a huge part of being free. We grow from glory to glory the Word says. If we become disobedient, apathetic, lazy, or backslide, the freedom goes away. Let’s determine to stay free!

When Satan tempted Jesus, he planned to renew his attacks on Jesus at an opportune time. †

You must be aware the enemy (demon) will look for an opportune time to come back on you. He will not succeed if you are obedient to the Word and are close to the Lord.

5 Reasons Why Deliverance May Not Be Realized:

If we [freely] admit that we have sinned and confess our sins, He is faithful and just (true to His own nature and promises) and will forgive our sins [dismiss our lawlessness] and [continuously] cleanse us from all unrighteousness [everything not in conformity to His will in purpose, thought, and action]. †

Confess to one another therefore your faults (your slips, your false steps, your offenses, your sins) and pray [also] for one another, that you may be healed and restored [to a spiritual tone of mind and heart]. The earnest (heartfelt, continued) prayer of a righteous man makes tremendous power available [dynamic in its working]. †

21Then Peter came up to Him and said, Lord, how many times may my brother sin against me and I forgive him and let it go? [As many as] up to seven times? 22Jesus answered him, I tell you, not up to seven times, but seventy times seven! 23Therefore the kingdom of heaven is like a human king who wished to settle accounts with his attendants. 24When he began the accounting, one was brought to him who owed him 10,000 talents [probably about $10,000,000], 25And because he could not pay, his master ordered him to be sold, with his wife and his children and everything that he possessed, and payment to be made. 26So the attendant fell on his knees, begging him, have patience with me and I will pay you everything. 27And his master’s heart was moved with compassion, and he released him and forgave him [cancelling] the debt. 28But that same attendant, as he went out, found one of his fellow attendants who owed him a hundred denarii [about twenty dollars]; and he caught him by the throat and said, pay what you owe! 29So his fellow attendant fell down and begged him earnestly, give me time, and I will pay you all! 30But he was unwilling, and he went out and had him put in prison till he should pay the debt. 31When his fellow attendants saw what had happened, they were greatly distressed, and they went and told everything that had taken place to their master. 32Then his master called him and said to him, You contemptible and wicked attendant! I forgave and cancelled all that [great] debt of yours because you begged me to. 33And should you not have had pity and mercy on your fellow attendant, as I had pity and mercy on you? 34And in wrath his master turned him over to the torturers (the jailers), till he should pay all that he owed. 35So also My Heavenly Father will deal with every one of you if you do not freely forgive your brother from your heart his offenses. †

13Then some of the traveling Jewish exorcists (men who adjure evil spirits) also undertook to call the name of the Lord Jesus over those who had evil spirits, saying, I solemnly implore and charge you by the Jesus Whom Paul preaches! 14Seven sons of a certain Jewish chief priest named Sceva were doing this. 15But [one] evil spirit retorted, Jesus I know, and Paul I know about, but who are you? 16Then the man in whom the evil spirit dwelt leaped upon them, mastering two of them, and was so violent against them that they dashed out of that house [in fear], stripped naked and wounded. 17This became known to all who lived in Ephesus, both Jews and Greeks, and alarm and terror fell upon them all; and the name of the Lord Jesus was extolled and magnified. 18Many also of those who were now believers came making full confession and thoroughly exposing their [former deceptive and evil] practices. 19And many of those who had practiced curious, magical arts collected their books and [throwing them, book after book, on the pile] burned them in the sight of everybody. When they counted the value of them, they found it amounted to 50,000 pieces of silver (about $9,300). †

4 Requirements to Keep Your Deliverance: