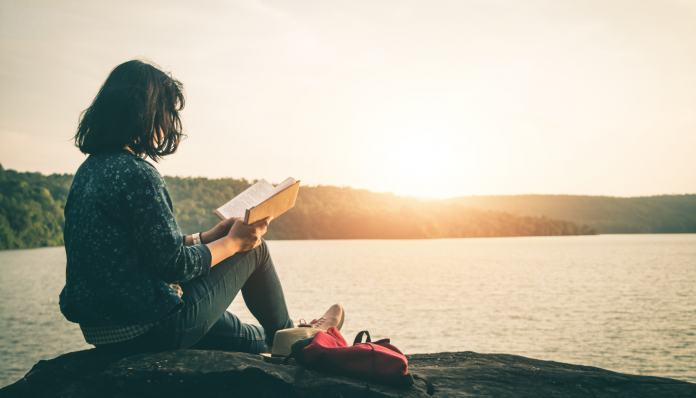 I once sat through a long session of a convention of realtors just to hear a motivational speaker.  The story with which he opened quickly became a mainstay in my arsenal of great illustrations and sermon-helpers.

I’ve read entire books and come away with one paragraph that became a staple in my preaching thereafter.  It was time well used and money well spent.

Elizabeth Gilbert, the author of the best-selling “Eat, Pray, Love” (which I do not recommend, by the way), attended a party and heard a story that became one of the defining principles of her writing career.  “Sometimes I think this man came into my life for the sole purpose of telling me this story, which has delighted and inspired me ever since.”

That’s how it works.  One story, a lifetime of benefit.

Gilbert says the man told of his younger brother who was an aspiring artist.  Living in Paris and struggling to get by, he seized every opportunity to get his name before people.  One day, in a cafe’ he met a group of people who invited him to a party that weekend at a castle in the Loire Valley.  This was big stuff and he eagerly accepted the opportunity to hobnob with people of wealth and influence.

This would be the party of the year, they said.  The rich and famous would be in attendance, as well as members of European royalty.  And, they said, it was to be a masquerade ball where everyone went all out on their costumes.  “Dress up, they said, and join us!”

All that week, the little brother worked on a costume he was sure would knock them dead.  His outfit would be the centerpiece of the ball, the one sure to generate the most interest and conversation.  When the day came, he rented a car and drove three hours to the castle.  He changed into his costume in the car and walked up to the castle, head held high, confidence and excitement exuding from the pores of his skin.

Entering the castle, he quickly realized his mistake.

The ball was indeed a costumed affair, he got that right.  But a critical detail his friends had failed to mention is that there was a theme for the costumes: a medieval court.

And the little brother was dressed as a lobster.

Throughout the hall, these beautiful people were dressed in their fancy gowns and robes, elaborate wigs crowning their heads, jewels sparkling like stars in the night sky.  He, on the other hand, was sporting a red leotard, red tights, red ballet slippers, and giant red foam claws.

Even his face was painted red.

The young artist, we’re told, was over 6 feet tall and extremely skinny.  But, with the bobbing antennae on his head, he appeared 9 feet tall.

We could say he stood out in the room.

For one long, sickening moment, the crimson-clad artist stood at the top of the steps staring at the people who were also staring back at him.

He could run away.  But no, he wouldn’t do that.

He had come this far.  He had worked all week on this outfit.  He was proud of it.

So, taking his life in his hand, the young artist took a deep breath and walked out on the dance floor.

“He reported later that it was only his experience as an aspiring artist that gave him the courage and license to be so vulnerable and absurd.  Something in his life had already taught him to just put it out there, whatever ‘it’ was.  That costume was what he had made, after all.  It was all he had.  So, he decided to trust himself, to trust in his costume, to trust in the circumstances.”

Silence fell over the room as he strode onto the floor.  The orchestra stopped playing.  The dancing came to a halt.  People gathered around the artist, intrigued.

Finally, someone asked him what on earth he was.

The place exploded with laughter.

Elizabeth Gilbert writes, “Not ridicule–just joy.  They loved him.  They loved his sweetness, his weirdness, his giant red claws, his skinny legs in his bright tights.  He was the trickster among them, and he made the party.”

He ended up dancing with the queen of Belgium.

That’s the story.  Every pastor knows what happens next.

A story amuses you, lodges itself in your consciousness, and will not go away.  You are going to have to deal with it in some way, to use it in something you are telling or preaching or writing.  This one is insisting you take it.

Here’s the use Elizabeth Gilbert made of the story:

I have never created anything in my life that did not make me feel, at some point or another, like I was the guy who had just walked into a fancy ball wearing a homemade lobster costume.  But you must stubbornly walk into that room, and you must hold your head high.  Never apologize for it, never explain it away, never be ashamed of it. You did your best with what you knew, and you worked with what you had, in the time you were given.  You were invited, you showed up, and you simply cannot do more than that.

They may ask you to leave–that is always a possibility–but they may make you a hero.

The ballroom may end up being far more welcoming than you ever imagined. You could end up dancing with royalty.

Or, you could end up being laughed at and left to dance alone in the corner.

What you absolutely must not do is leave the party.  To walkout is to admit defeat before the game starts.

Don’t miss the party, friend.  It could be your finest hour.

I paid $3.99 for this story.  That’s the newsstand price for the November 2015 Reader’s Digest.  Was it worth the price? To me, it was worth ten times that much.  D. L. Moody used to say he would walk a mile for a gem of a thought.  He said that in the late 1800s, so inflation surely would make that gem of a story worth much more.

Preachers and speakers sometimes find themselves in situations where they feel like the guy in the red lobster suit at a fancy ball.  They failed to tell you the theme of the event for which you are the guest speaker. You found out a half-hour before the invocation and it’s too late to change.  You cannot leave, and you have worked so hard on this message.

We were dedicating a new $5 million sanctuary. The Governor of North Carolina was in attendance and would bring remarks before my sermon.  Was my message appropriate?  Should we have made him the keynote speaker?  We had the attention of the city; were we making the best use of it?  It’s too late to change.  You suck it up and get out there and give it your best shot.

Sometimes you become the belle of the ball and end up dancing with royalty. Sometimes no one says a word to you and you have no idea how your effort went over.  And sometimes you feel like a miserable failure and your critics grab the opportunity to reinforce that conclusion.

Do your best. Dance with who brought you.  “We walk by faith and not by sight.”

If you’re a pastor, you’ll be preaching again next Sunday. So, do not let the bad experience–if that’s what it became–define you. Do not park by your failures.

“…forgetting what is behind and reaching forward to what is ahead, I press forward….” (Philippians 3:13ff.)

The Transforming Power of Mercy

Faith’s Influence Over Your World