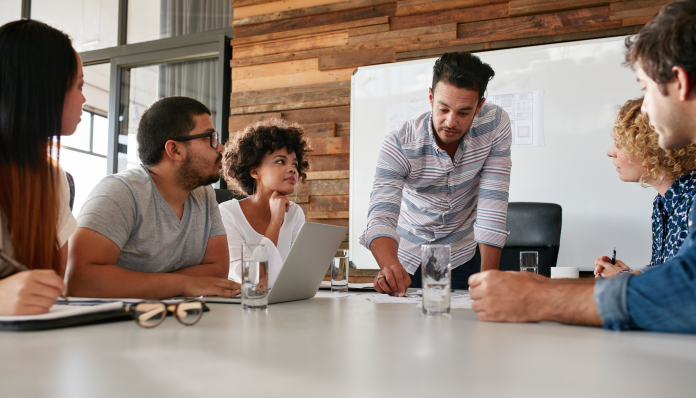 What got you here won’t get you there.

As much as you know that’s true, especially as you think about the new reality ahead, there’s probably something inside you that resists that.

I promise you there’s something inside me that resists the axiom.

Of course, as soon as I hear myself think those thoughts I realize that’s a terrible way to lead. In light of the massive distortion we’ve all been through, what helped you make progress in the past as a leader probably won’t work as effectively in the future.

But the resistance to change is real.

Coming out of the pandemic, the years ahead will be years of big change for almost everyone: church leaders and business leaders included.

So what shifts do you need to make to ensure you’re up to the challenge?

Here are five things every leader has to figure out to lead well moving forward. Master these, and the future and the change it demands will be much easier to navigate.

When things don’t go the way you planned in leadership, it’s easy to grow more closed, rather than more open.

On the one hand, openness to new ideas, new approaches, different perspectives, and fresh thinking would logically seem like the obvious thing to do.

But emotionally, staying open can be the hardest thing to do as a leader.

There are two reasons why you’ll close yourself off to new strategies unless you stop yourself.

First, you’re already overwhelmed, discouraged, and defeated. And when that happens, it’s easy to circle back to what you know, or to what worked. This isn’t entirely bad, but it’s not sufficient. Sure, don’t throw the baby out with the bathwater, but simply repeating what’s bringing you diminishing returns is a bad idea.

Repeating what’s bringing you diminishing returns is a bad idea.

For those reasons and more, a lot of leaders do the opposite of what they should do when facing uncertainty—they become more closed, not more open.

It’s not that they’ll never open up. They will. But often only after everything is collapsing.

And by that time, so much damage has been done it’s often too late.

Staying open in the midst of change, stagnation, and decline and changing along the way is a much better approach.

Closed leaders become suddenly become open when everything is collapsing and they hit rock bottom. But by that time, so much damage has been done it’s often too late.

One of my favorite definitions of success is getting up one more time than you were knocked down.

That’s a decent working metaphor for resilience as well. Resilience is the ability to recover quickly from difficulties. Lately, there have been so many difficulties.

What makes you resilient?

The factors vary, but some staples for resilience include:

The good news is all of these are in your control.

The easiest place to start is to get some rest. Why not begin there tonight?

At the most basic level, success is getting up one more time than you were knocked down.

The best kind of leadership style in uncertainty is agile leadership.

Agile leadership is flexible leadership, the ability to pivot and change not just once, but as often as changing conditions warrant.

When the future is unpredictable, agility is ability. Flexibility is a superpower.

The reason agility is so important is that a crisis means there are no clear answers and no immediate end in sight. Which is exactly why it’s called a crisis, not a problem.

Problems can be solved. Crises have to be managed. Daily.

As we move into the year ahead, it looks like crisis management will be a skill set required of every leader as we head into an unpredictable future.

When the future is unpredictable, agility is ability. Flexibility is a superpower.

As a leader (or as a human), you are only as healthy as you are emotionally healthy.

My journey to becoming more emotionally healthy took years and involved a lot of prayer, counseling, coaching, and feedback.

Pete Scazzero’s work on emotional health for leaders has been game-changing for so many leaders, including me. If you want an introduction to Pete’s work, here’s my latest conversation with him.

As a leader (or as a human), you are only as healthy as you are emotionally healthy.

Let’s finish up by going back to what Jim Collins calls Stockdale Paradox, one of the principles that a lot of leaders talked about early on in the crisis.

As you may remember, Jim Stockdale was an American Vise Admiral captured and imprisoned during the Vietnam War. He was held and tortured for seven years.

Stockdale said the first people to die in captivity were the optimists, who kept thinking things would get better quickly and they’d be released. “They died of a broken heart,” Stockdale said.

Instead, Stockdale argued, the key to survival was to combine realism and hope.  In Stockdale’s words:

“This is a very important lesson. You must never confuse faith that you will prevail in the end–-which you can never afford to lose–-with the discipline to confront the most brutal facts of your current reality, whatever they might be.”

That, essentially, is your job in crisis leadership. The greatest leaders confront the brutal facts but never lose hope.

What Does It Look Like To Lead Well In The 21st Century?

Few things are more important in leadership than us taking moments to pause and reflect.

That is why World Vision has partnered up with Krish Kandiah to create this interactive tool to ask yourself the critical questions and take stock of where you are as a leader and how you are doing.

Let this guide prepare you for the season ahead so you can be the leader your community needs.

5 Leadership Books to Read In December 2021

The Brutal Privilege of Pastoring Today

Break the Slump: How to Leverage Your 2021 Christmas Services to Reach More People

7 Signs of True Strength In a Leader

Don’t Overlook Your Staff During the Holidays

5 Leadership Books to Read In December 2021

Leadership Joseph Lalonde - December 3, 2021 0
Ihope everyone that celebrates Thanksgiving had a fantastic day remembering what they’re thankful for. Remember, we have a lot to be grateful for even...

The Brutal Privilege of Pastoring Today

Church Ministries Acts 29 - December 3, 2021 0
Brutal privilege. That is the phrase used by Brian Lowe, lead pastor of Exodus Church in Belmont, North Carolina, as he announced he will be...

Break the Slump: How to Leverage Your 2021 Christmas Services to Reach More People

Church Ministries Carey Nieuwhof - December 2, 2021 0
Like many church leaders, you’ve probably been working twice as hard and seeing half the results you’d wanted. That’s a recipe for disappointment, not...