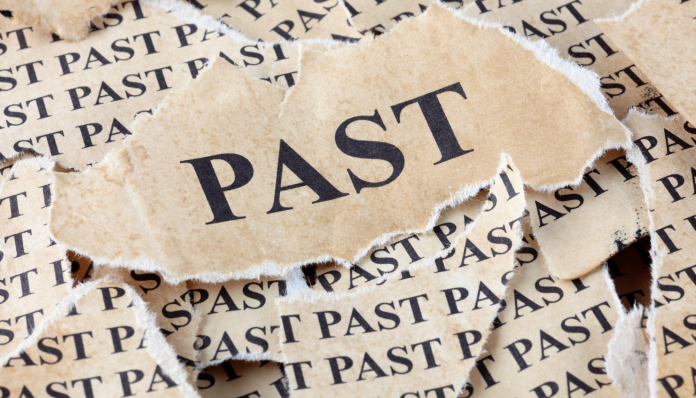 Everyone has a past. We all know this.

Some pasts are filled with light: Great families. A happy childhood. Adventures lived again and again.

And most are filled with a mixture of light and darkness.

Regardless of how much light or darkness we have in our pasts, we can’t allow our pasts to define us.

Our pasts tend to leave a mark on us. Our opinions are typically formed on the basis of what we’ve experienced.

We see our worth through lenses tinted by our past.

We see so many people dogged by their past. They live in their failures or success.

Think about the jock from high school who’s still out partying and trying to live the life of the typical all-star athlete. The only problem is he’s no longer 18 and in top physical shape.

No, in reality, he’s the 40-year-old who’s got a beer belly and health problems. He’s an alcoholic who cannot stop drinking. It’s a sad sight.

Or there’s the beauty pageant mom who never won the crown. Now she’s parading her children around wanting them to be the next Honey Boo Boo.

Unfortunately, these people have let their past define them. They’re still trying to live the life they lived years ago.

The truth is, we don’t have to let the past define us. We can move on from our past into something better.

The Past Does Shape You

In the examples above, you see how people have let their past define them, even as they grow further and further away from their heyday. The good news is we are shaped by our past but we’re not defined by it or bound to it. We can move past the troubles of the past and into something far greater.

Let’s look at a few people you may know who were shaped but not defined by their past.

Abraham Lincoln: Good old Abe has seen many failures and losses during his life. He had a business failure. He lost his fiance. He even had a nervous breakdown. And President Lincoln was defeated a dozen times when he ran for office.

Many would look at this and say there was no way he could move onto success. But he did. He was elected president and helped set in motion the freedom of the American slave.

Nick Vujicic: Nick was born without limbs. He has no arms and no legs. He could have let this disability define his life.

Instead, Nick Vujicic used his disabilities to shape his future. He took the steps to educate himself and he now speaks to large crowds on living a full life.

Ben Carson: Ben was born into poverty and raised by a single mother. He struggled throughout school and had a furious temper. There were few people who expected he would amount to much.

But his mother wouldn’t give up on him. Ben’s mother made him read two books a week and write a book report on each. She wouldn’t let Ben be another statistic.

Eventually, Ben went on to graduate with honors from Southwestern High School, attended and graduated from Yale, and got his M.D. from the University of Michigan.

Abraham Lincoln, Nick Vujicic, and Ben Carson all had rough pasts. They could have let it define them. Thankfully it didn’t.

Rather than define, their pasts helped mold and shape them into better men. They were able to overcome their adversities and rise to the occasion.

Question: How is your past shaping, not defining, you? Please share your thoughts in the comment section below.