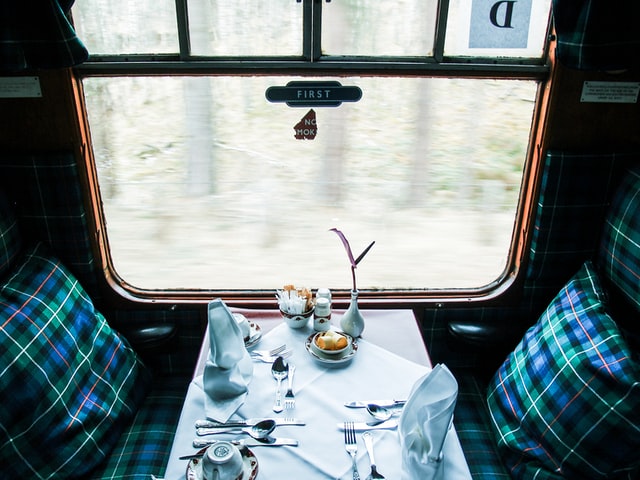 As a college student in Birmingham, I worked weekends for the Pullman Company, the people who operated the sleeper cars on passenger trains.  It used to fascinate me how people who wished to travel by Pullman had to pay through the nose.

I found it out the summer I worked in the ticket office for Seaboard RR taking phone reservations.

I wondered if the riders did not know the company was sticking it to them.

When I began traveling by plane, I was amazed to see people paying astronomical fares for first class accommodations.  Same plane, a little more legroom, coffee in a china cup instead of Styrofoam, and get to deplane first. That was about it.  A status thing? I imagine so. (Although, to be fair, the few times I was upgraded I really loved it.)

In the 1800s, the Texas stagecoach lines had three classes of tickets: first, second, and third.  This had nothing to do with where you sat, the food you ate, or when you disembarked.  It involved what you did when the coach got into trouble.

The roads were rough and undependable, and the hills were steep.  When a coach stalled, the first class passengers stayed on board.  Second class riders got out and walked.  Third class ticket-buyers had to get behind the coach and push or help dig out the wheels when they were stuck in the mud.

In a sermon where he told about this three-tier stagecoach setup, Dr. John Claypool said, “The Lord Jesus reversed the categories man had established.  The ones who get out and push? They are truly first class.”

Our Lord said, Whoever wishes to be great among you shall be your servant (Matthew 20:26).

The Apostle Paul called himself a bond-servant or slave of the Lord Jesus.  He said we preachers “do not preach ourselves, but Christ Jesus as Lord, and ourselves your servants for Jesus’ sake” (2 Corinthians 4:5).

Jesus said, If I, your Lord and Master, have washed your feet, you ought also to wash one another’s feet (John 13:14)

The word transliterated “deacon” is diakonos, the typical word for servant.  The prefix dia means “through” (as in diagonal, diameter, etc.) and konos means “dust.” “Through the dust” suggests that these workers were willing to get dirty to carry out their assignments.  So, one might say deacons were chosen by the church to do the dirty work.

Are the deacons the only ones going first-class in the church?  They are if no one else is serving.  But anyone and everyone devoting themselves to serving–to getting out and pushing when the coach gets stuck–these are the truly first-class members.

Just before my sermon, the choir sang a musical number with a guest soloist, an older fellow.  As the music ended and I was about to rise and walk to the platform, the singer abruptly toppled off the stool where he had been sitting, with some kind of seizure.

Most in the congregation recoiled, having a minor shock at what had just happened.  However, not everyone did.

A half dozen people in the congregation quickly rose and  converged on the scene. While the rest of us sat frozen in place, these people–a policeman, a firefighter, a nurse, and a couple of deacons– took care of the gentleman.  (He spent the night in the hospital and was released.)

True servants take care of difficult situations.  Everyone else stands back in shock. Some may even say, “This is not my job.” But the servant-minded among us step up and take charge. This is their calling.

O Lord, make me a servant, one like the Master.

The blind beggar of Jericho kept calling for Jesus to have mercy on him. He had been told that “Jesus of Nazareth is coming this way.”  As our Lord moved into earshot and heard the man, He commanded that he be brought to Him.  The disciples helped Bartimaeus to his feet and led him down the road, stopping in front of Jesus.  Then, our Lord asked the man the question every servant asks a thousand times as a part of his/her assignment:

Do you know someone in your church like that?  Honor him/her. They are truly first-class Christians.

They say the best way to know whether you have a servant spirit is how you act when someone treats you like a servant.

It pains the Lord, surely, when His servants the ministers and pastors of His churches live as royalty and expect people to cater to their needs.  No matter the size of their congregation or the demands of their ministries, there is no excuse for such. The One who is our Role Model in everything said, “I am among you as One who serves.”  And “The Son of Man did not come to be ministered unto but to minister, and to give His life a ransom for many.”

God help me do the same.

We do well to remember that just as going first class on a train or in a jetliner costs extra, so with those who would travel first class in the Kingdom.

Which probably explains why some do not choose to travel this way.  The price was just more than they were willing to pay.