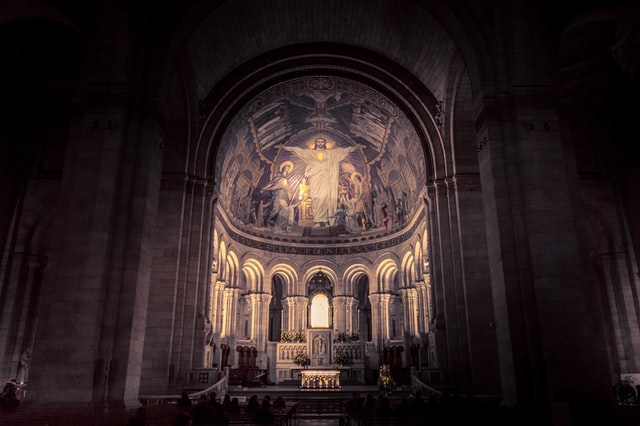 Who are you really ‘competing’ against in ministry?

It’s an interesting question, and you may be tempted to dismiss as either inappropriate or bad theology. Fair enough.

Except a lot of leaders are competitive, and if you’ve ever felt yourself secretly resenting anything that seems to be competing with your ministry’s growth, it might be a good idea to ask the question.

Leaders can waste a lot of otherwise productive time and energy battling false competitors, and meanwhile the real problem gets ignored. The crisis we’re currently in makes it even that much more important, because you don’t have time to waste or energy to spare.

It’s easy to envy growing, successful churches or get mad at the church across town (or megachurch) that stole your members in an epic sheep swap. It’s also a mistake.

So…what’s the difference between the competition in your head and the real battle you should be fighting?

Here are four false competitors most church leaders battle, and the real competition we too often ignore at our own peril.

1. The Megachurch In Your City Or Online

About that megachurch church many pastors live in fear of…are they your competition?

That question gets accelerated in a post-COVID world as more and more church attendance shifts online. In all likelihood, what’s happening is a significant number people who used to attend a local church have now switched to being part of a megachurch or other church with a strong online presence.

While we won’t really know what’s happened until after we move into a post-pandemic world, I’m guessing the 18% of churches that consistently report growth during 2020 are seeing a percentage of that growth from Christians who used to attend another church. (Consolidation is the #1 trend of the 7 New Disruptive Church Trends outlined here.)

As hard as it might be to see that happen, growing megachurches are not actually your ‘competition.’ (Here are 5 more unfair myths about megachurches).

Different churches trying to reach the world do not create a case of Coke v. Pepsi or Amazon v. Walmart. No, deciding another church is your competitor is more like Coke deciding to take on Coke, or Amazon battling Amazon. That’s usually known as suicide, right?

One church should never try to take on another church, but we do. And when we do, we lose.

To make matters worse, trying to become the rock star preacher when that’s not your gifting or pretending to be something you’re not only makes the problem worse.

Imitation kills innovation and your soul. Envy rots the bones. Nothing good comes from that dark place.

So, what should you and I do with the growing megachurch in your city or online?

Celebrate what God is doing through others, and focus on what he’s called you to do, that’s what.

2. The Church Next Door

It’s easy to lose sight of the fact that your church isn’t THE church, and when you do, everyone loses. When any church flourishes, it’s cause to celebrate, not a reason to complain, fear or compete.

When it comes to the church, when one part of the body hurts, we all hurt. And when one thrives, we all celebrate.

The pastor you resent is your ally, not your competitor.

When churches start cooperating with each other rather than competing against each other, unchurched people see unity. Unity and respect are far more attractive than division.

The new kid on the block for false competitors is in-person attendance.

As churches reopen for physical gathering, you can sense an emerging competition between those who gather for ‘real church’ in person and those who participate online.

What if that’s a false dichotomy?

Most churches have seen sliding or plateaued attendance for years prior to COVID.

To belittle online attenders as not-real attenders is a great way to alienate what’s left of your congregation.

If your future plan is get everyone back in the building, prepare for a future of diminishing returns.

If your plan is to see church as being online and onsite, you’ll see a much brighter future.

Wise leaders will see online church as something they cooperate with rather than compete with.

Almost every pastor I know (myself included) has at one time or another thought of the weather as our competition.

Too rainy? People will stay home.

Too sunny and warm? Everyone’s going to head to the beach.

I’ve even had one pastor who lives in a really nice climate that his enemy is wind. If it’s too windy, he told me, attendance drops. I wish I was making that up. I’m not.

The perfect conditions for church seem to be overcast but not raining, cool but not too cold…just miserable enough that people say, “It’s not that nice out, so let’s head to church.”

So to that point, what actually is your real competition?

The real competition for the local church isn’t another church, the megachurch, online church or the weather. It’s indifference.

You ready for this?

People aren’t thinking about you. Or if they are, they don’t see enough value to drop what they’re doing to join in.

I know that hurts, but it also paves the way for you and your team to reposition yourself for the future.

Indifference is the enemy of all churches: Large, small, mega, micro, growing, plateaued and declining.

The average unchurched person doesn’t lie awake on Saturday night wondering what you’re going to preach on next.

He does lie awake at night though, wondering if his marriage is always going to be this bad, if he’s going to be stuck in a job that leaves him feeling so unfulfilled and if his drinking is starting to get the best of him.

As you know, these are all spiritual questions.

Of course you can help. The key is to cut through the indifference.

How do you do that? Well, this website (and the internet) is full of ways to do that, but let me highlight three briefly.

I. Be The Local Church

So, no, you’re not the leader of your favorite megachurch or church you most admire. No problem.

Just be the leader of your local church. Love your city, township, village….your people.

Nobody should be able to out-local the local church. I promise you the megachurch you admire/envy won’t.

II. Make Your Passion for the Mission White Hot

I get it, passion waxes and wanes in all of us (even in the best leaders). And the current moment has made it that much harder.

But one of the differences between leaders who are effective over the long haul, and those who are not, is that the effective leaders always find a way to keep the passion for the future alive.

By contrast, leaders of stuck or declining churches or organizations generally do NOT burn with drive, desire or passion.

In fact, I can’t think of a single leader of a growing church who isn’t passionate about their mission.

So, stoke your passion.

If God wanted you to be the leader you’re jealous of, he would have made you that leader. But, he made you, well, you.

It can be so easy to feel inadequate for the job…that you’re not gifted enough, talented enough or smart enough to do what you’re called to do.

Not true. And besides, putting on an act every day is exhausting.

Leaders who are comfortable with themselves, who know their limitations, and who can lean into their unique gifting have a great future ministry to an unchurched culture.

Those are some of the key ingredients in authenticity. And authentic leaders resonate with a culture that’s tired of being hyped, sold and manipulated.

Stop wishing things were ideal and embrace the real. It will take you further than you think.