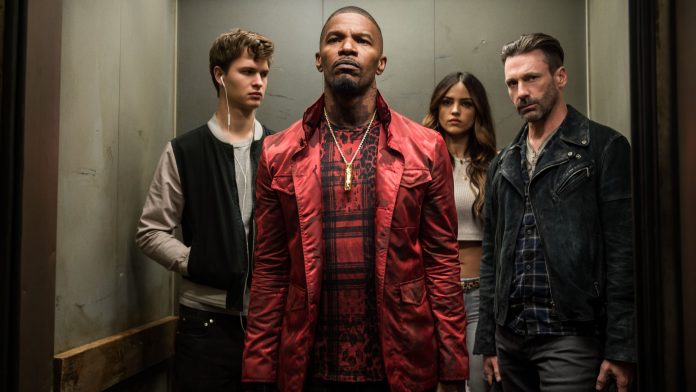 Baby Driver is a stylized, modern gangster movie. A young man, Baby, gets caught up in a life of crime after he stole the car of a professional thief. From there, his life spirals downhill.

Let’s dig into the leadership lessons from Baby Driver!

If you view Baby Driver in the theater, you’ll be treated to a brief thank you from the director of Baby Driver. Edgar Wright recorded a thank you message to audiences watching the movie as he intended. He wants people to watch Baby Driver on the big screen. It’s how he envisioned people enjoying the movie.

Do you remember the last time you thanked someone? If it wasn’t yesterday or today, you need to go and thank someone. Take 5 minutes to let someone know you appreciate them and the work they’re doing.

2. Blending in can help:

You’ve probably heard the advice to stand out. You HAVE to be NOTICED to be successful.

Yet in Baby Driver, we see Baby (played by Ansel Elgort) achieve success by blending in.

He’s being pursued by the police. There’s a police helicopter flying overhead. And he needs to get away.

He finds two other vehicles that are red and look like the car he’s driving. He pulls in-between the two cars. Then he switches places as they head under a bridge.

This maneuver of blending in allowed him to evade the police.

While you may not desire to blend or fit in, doing so can help you get where you need to go. By blending in, you can hop in on the latest trend and draft on the success of others.

Don’t be afraid to blend in once in awhile.

There’s nothing wrong with a little quiet.

Doc (portrayed by Kevin Spacey) tells the heist crew there’s nothing wrong with silence after one of the crew members complained about the silence.

Are you afraid of silence? Many leaders are. They believe you always have to be doing something or receiving input. Silence is for fools.

Those leaders are wrong. Silence is good. Silence allows you to focus and recenter.

Allow silence into your life. You’ll gain new insights you were missing because of all the static.

You don’t belong in that world.

Joe adopted and raised Baby after his mother and father passed away. He was the only father-figure Baby ever really knew.

He was also a voice of reason in Baby’s life. After he saw Baby was the getaway driver in a recent bank heist, he told Baby he didn’t belong in that world. He was better than that.

Great leaders do that. They instill value in the people they’re leading. Joe knew Baby had potential. He helped him realize it.

What are you doing to help your team members realize the potential within them?

Baby was a talented young man. Not only could he drive, he could also create some sick music.

He would sample audio he’d recorded and make the samples into music. Good music.

So, Baby had two skills he used well. He probably had more but that’s what we saw.

You, you’re a lot like Baby. You have skills. Multiple skills.

Are you using those skills to lead and thrive? You need to find ways to creatively use the skills you have. They’re what is going to keep you moving forward.

6. Always be ready for inspiration:

You know Baby was sampling audio for his music. What you didn’t know was where he was getting the audio. He always carried an audio recorder with him and recorded conversations.

He then used these conversations to loop and track into music.

There was inspiration all around him. Baby knew he had to capture it. And he did.

7. People have a reason for what they do:

There was something funny about Baby. He always had earphones in his ears.

Bats (Jamie Foxx) questioned why he was always listening to music. Doc spoke up for Baby and told Bats the reason: Baby had tinnitus, a condition where his ears were constantly ringing.

Listening to music helped ease the ringing. That was Baby’s reason for always having his headphones one.

People rarely do things without a reason. Even if it seems like they do.

There’s a reason. Your responsibility as a leader is to find out why.

8. People are listening even if you think they’re not:

Bats was frustrated with Baby’s listening to music. He believed Baby wasn’t listening. And he called him out.

Baby then recited word for word the plan Doc had laid out for their next heist. Baby was listening.

You will have times where you think your team isn’t listening to you. But they are.

They’re always listening and getting information about you.

So… What’s your story, Baby?

Deborah (Lily James) had a romantic interest in Baby. And she wanted to know his story.

She knew there was something special about him. He had a great story to tell.

Great leaders desire to hear the stories of their team members. They want to get to know them better. They know when a team member shares their story, connection grows.

Go ask your team members their story. You’ll be amazed at the skills and abilities they have.

Doc turned out to be a bad leader. He pressured Baby into another job. He threatened the lives of those he loved.

Great leaders don’t have to threaten those they lead. They build trust with their teams and don’t force them to do things they don’t want to do.

I worry that I’m not good enough for you.

Baby had his faults. He knew that. That’s why he had self-doubt over his worthiness to date Deborah.

Have you been there? Do you have these doubts as well?

If you do, don’t be ashamed. Self-doubt is normal. We doubt ourselves because we know the value of the work we’re doing.

The best thing you can do when you doubt your worth or abilities is to continue to push forward. Reach that next success.

This will remind you that you’re worthy of doing the work you’re doing.

12. People tell bad leaders what they want to hear:

After Doc threatened Baby, he took the job. He didn’t want to but he did.

Why? Because he was scared to tell Doc the truth. Instead, he gave Doc what he wanted to hear.

Bad leaders rarely hear the truth. They hear words that tickle their ears.

The people they lead are scared. They know they may be fired for telling the truth.

Allow your people to speak freely. You need to hear the nitty-gritty. You need the truth.

I say we all get some sleep.

Baby told the rest of the gang to get some sleep. They were going to need it for the heist in the morning.

While Baby had different plans, he was planning to escape with Deborah, this Baby Driver quote still rings true.

Most people need 7-8 hours of great sleep to be at their most effective. Go get some sleep.

Joe had been a true father to Baby. And Baby had vowed to protect Joe as he lost his hearing and aged.

Yet Baby failed to protect Joe.

Joe’s apartment was broken into. He was tossed to the ground. And his wheelchair was stolen.

No matter how hard you try, you will face failure one day. The failure will sting.

But there’s good news. Failure isn’t final. You can move on from failure and see success another day.

15. Even bad leaders can have good moments:

Yes, Doc was a bad leader. He brought Baby into a job he shouldn’t have and that resulted in the deaths of a lot of people.

But Doc showed there is good even in the worst people. Doc protected Baby as the police descended on them. He even laid down his life for Baby.

Even though we don’t want bad leaders on our teams, we need to realize there is good in everyone. Be gentle in letting them go or moving them on.

16. Great leaders don’t let other people pay the price for their actions:

Baby and Deborah were on the run. They come over a bridge only to see the road blocked by police cars.

Deborah threw the SUV into reverse and began to backup. Baby pressed on the brake. He turned off the vehicle. And exited with his hands raised up.

He knew Deborah would pay a hefty price if she went down with him. He took the fall for his actions.

Great leaders don’t let others pay for their mistakes. They own up to what has been done and take on the consequences.

Don’t let your team suffer for your mistakes. Take the hit.

Baby Driver was filled with great music. The car scenes were exciting. Everything seemed to flow well.

If you’re looking for a great action flick, check out Baby Driver.

One word of caution: There is a lot of crude language and violence in Baby Driver. If those things will bother you, skip this.