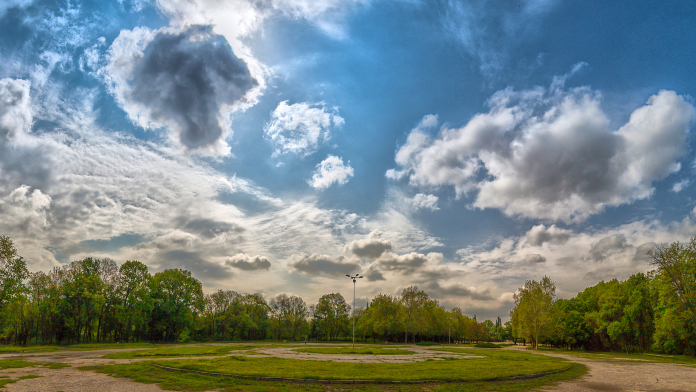 “In thy presence there is fullness of joy; at thy right hand there are pleasures forevermore” (Psalm 16:11).

“Cast out the worthless slave into the outer darkness; in that place there shall be weeping and gnashing of teeth” (Matthew 25:30).

If the atmosphere of heaven is joy and praise, then the noxious fumes of hell must be composed of equal parts anger, complaining, bitterness and blaming.

If your heart is in heaven, your head should be in the clouds.

Okay, I’m playing with metaphors here and admit it. But I am overwhelmed by all the scriptures which keep telling us that the atmosphere around the throne of Heaven is praise and joy and gratitude. Worship, in other words.

There is Psalm 16:11 (above) which is just about as good as you could ask for.

In John’s vision of Heaven which we call Revelation (or more often “Revelations”), he tells us that near the throne stood “four living creatures, each having six wings…. Day and night they do not cease to say, ‘Holy, holy, holy, is the Lord God, The Almighty, who was and who is and who is to come’” (Revelation 4:8).  Around the throne, the praise is continuous.

Almost every time we see angels throughout scripture, they seem to be praising God.  There is joy in their presence when a sinner repents, Jesus said.  He should know. (Luke 15:7,10))

The psalmist said, “My  mouth shall tell of Thy righteousness, and of Thy salvation all day long; For I do not know the sum of them” (Psalm 71:1).  We are to literally rejoice continuously (I Thessalonians 5:16).

“Every created thing which is in heaven and on the earth and under the earth and on the sea, and all things in them”–I’d say that pretty much covers the lot!–“I heard saying, ‘To Him who sits on the throne, and to the Lamb, be blessing and honor and glory and dominion forever and ever’” (Revelation 5:13).

Okay, point made? The atmosphere of heaven is praise and worship, joy and thanksgiving, gladness and happiness.

We may conclude therefore that of those closest to the Lord in this world–the heavenbound, the citizens of the heavenly kingdom, the spiritually mature, those with whom He is well pleased, however we wish to phrase it–praise and gladness are continually “in their mouth.”

David said, “I will bless the Lord at all times; His praise shall continually be in my mouth” (Psalm 34:1).  The next verse reads, “My soul shall make its boast in the Lord; The humble shall hear it and rejoice.”

If the righteous have their hearts in heaven and their heads in the clouds, the minds of others are often found in the gutter, while their hearts spew acid.

If joy is the atmosphere of heaven, then the air in hell is toxic because it is composed of anger, blaming, complaining, griping, finger-pointing, undercutting, and discouragement.

Hell is worse than a thousand Chernobyls.

Want to see a congregation where the air is toxic and the fumes of hell are poisoning relationships, attacking leaders, and destroying worship?  Go back to the wilderness wanderings and listen to the gripes of this carnal crowd following Moses….

Exodus 15:24 “So the people grumbled at Moses saying, ‘What shall we drink?’”

Exodus 16:2 “And the whole congregation of the sons of Israel grumbled against Moses and Aaron in the wilderness.” (They said,) “Would that we had died by the Lord’s hand in the land of Egypt, when we sat by the pots of meat, when we ate bread to the full, for you have brought us out into this wilderness to kill this whole assembly with hunger.”

Exodus 17:2 “Therefore the people quarreled with Moses and said, ‘Give us water that we may drink’.”

Numbers 11:1 “Now, the people became like those who complain of adversity in the hearing of the Lord, and when the Lord heard it, His anger was kindled….”

Numbers 12:1 “Then Miriam and Aaron spoke against Moses….and said, ‘Has the Lord indeed spoken only through Moses? Has He not spoken through us as well?’ And the Lord heard it.”

Numbers 16:1ff. “Now, Korah…with Dathan and Abiram (and others)…rose up before Moses, together with some 250 leaders of the congregation, chosen in the assembly, men of renown, and they assembled together against Moses and Aaron, and said to them, ‘You have gone far enough, for all the congregation are holy, every one of them, and the Lord is in their midst; so why do you exalt yourselves above the assembly of the Lord?’”

Numbers 16:41 “On the next day all the congregation of the sons of Israel grumbled against Moses and Aaron saying, ‘You are the ones who caused the death of the Lord’s people.’”

Had enough?  Any one see a trend here?

Bitterness, blaming, griping, and demanding. Those are the sounds of hell.

“But for the cowardly and unbelieving and abominable and murderers and immoral persons and sorcerers and idolaters and all liars, their part will be in the lake that burns with fire and brimstone, which is the second death” (Revelation 21:8).

Anyone want to spend eternity with that group? None of that for me, thanks.  We can imagine the anger and recriminations, the blame-placing and fingerpointing going on from that mob throughout the ages.

Those are the sounds of hell.

Now, consider the atmosphere in your congregation….

If you find yourself in the midst of such a congregation, give thanks and encourage them. They are a rarity.

Anyone constantly griping and complaining in your congregation? Anyone never satisfied with what their church is doing? Anyone always pointing out how it could have been done better, how the leaders let them down, how the church today just isn’t dedicated like it was in former days?  Anyone bitter? Anyone working to undercut their leadership?  Anyone insisting that the preachers are not holy and should have no more authority than any one else? Anyone playing the role of the devil’s advocate and seemingly born for that role?

Imagine something with me for a moment….

How would it be if you approached the naysayers, those constantly belly-aching and finding fault, and said to them, “Brother, you sound like hell.”

If I were a wagering man, I’d bet money that they would accuse you of profanity without ever pausing to consider what you actually said.

And that’s probably why you won’t say it.

Maybe you should. (As the Lord leads. And only then.)