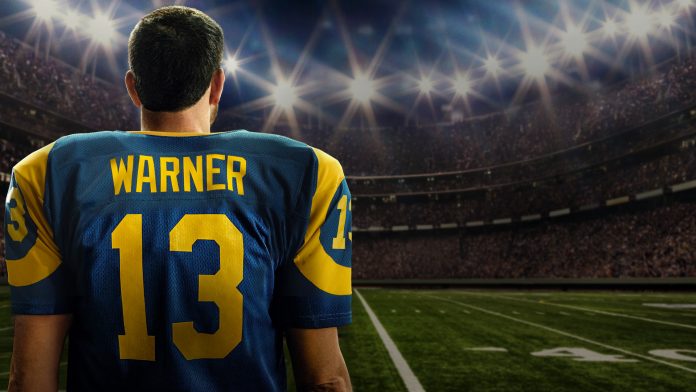 Have you ever felt like an underdog? Were you picked last for sports or business? Sometimes we feel like no one wants us.

He knew he was good. He knew he could play. Yet, the teams in the NFL didn’t want him.

American Underdog tells the story of Kurt Warner and how he went from a high school football player to a Hyvee stocking clerk to an arena football star to an NFL star while being at an age most would have considered too old.

American Underdog is a feel-good movie. It’s inspiring and uplifting. And, surprisingly, I have to recommend it even though I don’t typically like these types of movies.

More than being feel-good, American Underdog is packed with leadership lessons. Let’s look at what you will find in this great movie by the Erwin Brothers.

1. What looks like failure can be the next step to success:

Warner was watching the all-star football player Joe Montana. Montana had been sacked while trying to make a pass. It looked like a failure.

Joe Montana threw the perfect pass at Superbowl XIX in the next play. The failure Montana had experienced was but a stepping stone success.

What failures have you faced? Did you think they were the end of you?

The failures you face are not fatal. They’re but a stepping stone, a setup for success.

Embrace the failures. Then step back into the pocket.

2. Listen to your coaches:

Warner had a high school football coach, Coach Allen (Adam Baldwin). During practices and games, Warner would step out of the pocket.

The pocket is a passing area in football. In the pocket, the passer is protected by the offensive line. Step out of it and you can be in trouble.

Warner wouldn’t listen to his coach. He kept going out of the pocket. Eventually, Coach Allen had enough. He forced Warner to stay in the pocket and be hit repeatedly.

Warner eventually learned to stay in the pocket, take hits, and succeed.

We hire coaches because we know they can take us to the next level of business, leadership, personal development, or relationship improvement. But we can be like Warner.

We can struggle to listen to our coaches. We find ourselves trying to do our own thing.

You hired a coach for a reason. Listen to them.

3. Be careful what you let define you:

Warner met a young woman at the local bar. Her name was Brenda Meoni (Anna Paquin). She was a young, single mom of two children.

Brenda told Warner he didn’t look like a cowboy. He said he wasn’t. He was a football player.

This identity of a football player defined who Warner was. He lived, breathed, and slept football. It was all-consuming.

Your position does not define you – Leadership lessons from American Underdog

As American Underdog progressed, Warner found himself as more than a football player. He became a husband, father, and Christian.

We have to be careful of what we let define us. Too often, we define ourselves by our leadership titles.

Find something that truly defines you. Let it be your faith, your commitment to your spouse, or something more significant than a title or position.

I’m not going to quit. Because that’s what leaders do (don’t quit).

Coach told Warner he needed to think about life after football. Warner wasn’t having any of that. He knew what he wanted to do.

He also knew that leaders don’t quit easily. They keep pushing, even when things look impossible.

Are you quitting? Do you feel like you’re ready to?

We discover that Zack’s blindness was caused by an accident. He was rushed to the hospital but there was damage already done.

The doctor’s worked on him for over 24 hours before the truth came out. Brenda’s ex-husband had accidentally dropped Zack on his head. Had her ex-husband admitted fault quickly, Zack may not have suffered the life-altering consequences.

How often have issues been hidden, covered up, or brushed over? Too many times to count.

Leaders know they can’t keep mistakes or accidents covered up. They have to admit fault quickly. They know if they don’t, a simple mistake may become a disaster.

This is your dream. You’ve got to fight for it.

Brenda knew Warner’s dream was to play professional football. His participation in football could have a negative effect on their relationship. Still, she encouraged him to pursue his dream.

Warner did pursue his dream. He knew what he wanted. He achieved it.

What’s your dream? Are you pursuing it? Are you holding back?

Pursue your dream. Go for it. Win big.

Brenda’s father told this to Warner. He wanted Warner to know life isn’t about success or fame. Life is all about the process of becoming something more.

Warner began to live this quote out after hearing it. He still achieved but he also became more.

Life is not about what you can achieve, it is what you can become – Leadership lessons from American Underdog

The world tells us that we need to achieve more, better, and bigger. That’s not true. That’s not what life is about.

Life is about becoming what you were created for.

If you’re stuck in the trap of achievement, look for ways to get out.

Warner was approached by Jim Foster (Bruce McGill). Foster was starting an arena football league. He wanted Warner to be the star player.

Warner turned down the offer. He thought that the arena football gig would be below him. It was, after all, not real football.

Later, Warner returned, tail between his legs, and took the deal.

The deals we’re offered may not seem like they are the perfect fit for us. They may seem below us or that they won’t get us to where we want to go.

Take the deal when it makes sense.

I hate to lose. I hate it for the team.

Warner admitted he hated to lose. It’s no fun to lose.

Yet, his reason for hating it wasn’t about himself. He hated to lose because it hurt the team.

Have the proper motive. Keep in mind leadership isn’t about you. It’s about the team.

10. The wilderness is where we gain our best experience:

Coach Dick Vermeil (Dennis Quaid) had a talk with Warner. Vermeil had been out of football for 14 years. He considered this his wilderness years.

However, he didn’t see those years as worthless. Those years wandering in the wilderness are where he gained vast experience that translated to football coaching.

You may not be in a leadership position. Maybe you transitioned out. Maybe you feel lost…

These are the times you’re growing. You’re developing skills you couldn’t have while leading.

Capture what you’re learning while in the wilderness. Translate it to leadership.

One of the characters said this quote in American Underdog. It struck me as profound truth.

Character isn’t something that is found at a job. Character is within you.

Character is what defines you. Make sure your character is there. It will translate to everything you do.