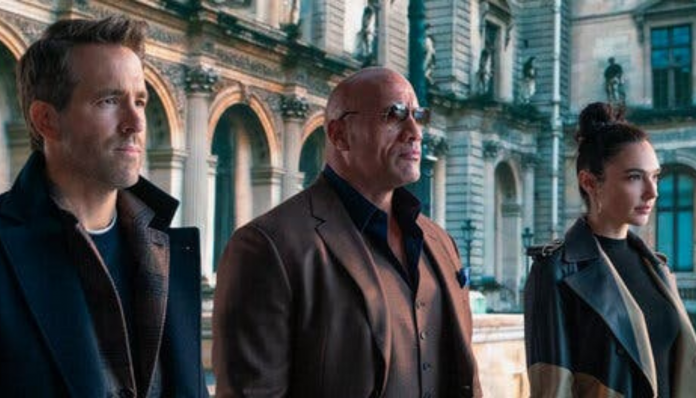 It’s a fun comedy that brings laughs, action, and adventure to the big and little screen. Red Notice released on Netflix and in theaters on the same day, so you won’t miss out if your local movie theater is currently closed due to COVID.

1. Know the limits of your authority:

Hartley was in Rome chasing the world-class art thief Booth. Hartley runs into Inspector Urvashi Das (Ritu Arya) in his investigation. She had something she had to say to Hartley.

Das tells him that he doesn’t have any authority in Rome. Hartley may be an agent from the United States, but he holds no authority in foreign countries.

There is a limit to our authority. It does not extend beyond the bounds it has been given.

Our authority in #leadership only extends so far. Don’t go past the limits of your authority – Leadership lessons from Red Notice

This means we may not have authority in other organizations or even at different levels of the organization we’re working.

Realize your authority has limits. Respect them.

2. We can be great with our skills but use them for the wrong things:

Booth was a master art thief. He was second only to Bishop. He had pulled off art heists no one else could.  His skills were exceptional.

Booth was skilled. However, Booth used his skills for the wrong things.

He used them to steal. To make money inappropriately.

We see this in the business world regularly. Some people have great skills. Yet, they use these skills to rob, cheat, and push their way to the top.

We have to be careful. The better we become, the more we can be tempted to use our skills for the wrong reasons.

You have no idea what I’m capable of.

Hartley uttered these words tersely to Booth. He had to after Booth told the prisoners that Hartley was a cop.

In prison, this means almost certain death. Hartley had another prisoner approach him. This could have ended badly for Hartley. It didn’t, though.

We all have skills that people don’t know. Be willing to show them – Leadership lessons from Red Notice

Hartley had to let Booth know he wasn’t playing around. There were things he could do that would hurt Booth. Hartley had his own set of skills, after all.

What skills do you have? Are there skills you’re not showing?

Your team doesn’t know these skills. You do, though.

Know that you’re capable of more.

While Bishop was a lousy leader, her words are still valuable.

She told her people that you couldn’t have excuses and results. The two are mutually exclusive.

Think about your leadership. Are you making excuses? Are you producing results? If you’re doing one or the other, you’ll notice you’re not doing both.

Make sure you leave excuses behind. Start producing results.

Booth said he became a thief because his dad had accused him of stealing a watch when he was ten years old. His dad gave him the silent treatment for a year. Eventually, his dad came home with his watch on his wrist.

This changed Booth’s life for the worst. He would enter into a life of crime so he wouldn’t be like his dad.

Do we continue to live in the mistake? Do we make amends? Do we apologize?

Great leaders apologize. They choose to say, “I’m sorry. I was wrong. Will you forgive me?”

Booth blamed his father for his life of crime. So did Bishop. We also hear from Hartley that his father led him down the path he went.

While it seems strange, your issues with your father will carry over long-term.

We have to become better at dealing with the issues we have faced. We cannot continue to carry the weight, shame, and guilt we have because of or from our fathers.

Determine today that you will no longer carry these issues with you. Resolve them. If your father is still here, talk to him about it.

Reconciliation will change your life.

Hartley and Booth had a plan. They would infiltrate Sotto Voce’s (Chris Diamantopoulos) party. There, they would break into his vault of illegally gained artifacts. Then, they would steal the second egg of Cleopatra’s.

Their plan changed when Bishop showed at the party. Hartley went to Bishop. He began to talk to her. They began to dance.Plans change. Change with them – Leadership lessons from Red Notice

We cannot hold to our plans tightly. We have to have them loosely held in our hands. When new information or people arrive, we must consider what to do next.

The plan is only a guide. Guides are not always accurate.

Be ready and willing to change plans.

I’m a good guy but sometimes I do bad things.

Hartley said this to agent Das after he pretended to handcuff Booth. He pretended to arrest Booth because they had begun to work together to get the three eggs to clear Hartley’s name.

I think we’re all a little like Hartley in this regard. We are (or want to be) good guys. We do the right thing most of the time. Then, sometimes, we do something bad.

It reminds me of Paul in the Bible. In the book of Romans, Paul says, “I do not understand what I do. For what I want to do I do not do, but what I hate I do.”

We want to do good. Sometimes we do bad. We have to reconcile this and continue to strive to do good.

9. Be careful of your business partners:

We discover Bishop was playing a long game with Voce. She had seduced him. She made him think she cared for him. What she was doing was playing him.

Bishop ends up poisoning Voce. She takes the egg from him and leaves.

Our business partners have to be carefully chosen. We cannot blindly jump into business with people.

10. What you think your people want may not be what they want:

The reason behind obtaining the three eggs of Cleopatra was because there was an upcoming wedding. A namesake of Cleopatra, Cleopatra (Brenna Marie Narayan), was betrothed to be married.

Her father, Aranoub Magdy (Ethan Herschenfeld), wanted to give her the eggs of Cleopatra as a wedding gift. The eggs were beautiful but no match for something else at the wedding.

Ed Sheeran began to play a song. Cleopatra went crazy. She loved Ed Sheeran. That he was there was more important than the eggs.

We can have an idea of what our employees want. We think we know. But we are often wrong.

We can give them a gift we think they would enjoy because we want it. This is the wrong way to think.

Get to know your people. Find out what they like. Then give them that. It will mean so much to them.