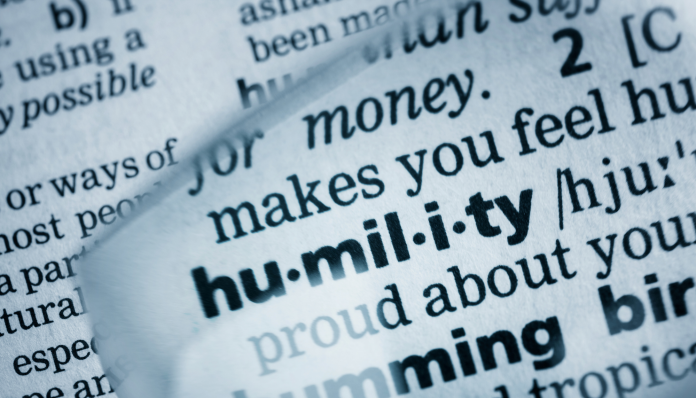 There is a genuine, much-needed humility. And there is the fake kind.

We’ve all seen it and some of us have done it.

The pastor strides to the pulpit, opens the Bible, reads his text, announces his subject, then begins with an apology. “I have no right to speak to you on this subject.” “Many of you know more about this subject than I do.” “I’m not sure why the Lord laid this on my heart, but I’m going to give it a try.”

The well-meaning pastor intends it as demonstrating transparency, leveling with his people, admitting what they already know–that he’s human and fallible. A fellow struggler. One of them.  However….

Many in the congregation are thinking, “Well, if you don’t know, preacher, we sure don’t. Get it over with and let’s go home.”

Such self-deprecation cuts the ground out from under everything the minister is about to share. It diminishes the authority with which God intends him to proclaim His Word. He ties his own hands and weakens his effectiveness before he even begins.

Now, there is another side to this, of course, when the pastor acts as though he were the Lord God Himself and gives the impression that his word is the only one  that counts.

This is pride; the first is fear.

It is fear that causes a pastor to undercut his sermon before he even delivers it with apologies of inadequacies and confessions of weakness and pleas for understanding.

Neither pride nor fear is welcome in the Lord’s pulpit.

Both are ditches to be avoided. In between lies the road.

When God called Jeremiah to the ministry, the young man began to protest. He was too young, too ill-prepared, too frightened of audiences, too unworthy. But God would have none of that.

Do not say ‘I am a youth.’ Because everywhere I send you, you shall go. And all that I command you, you shall speak. Do not be afraid of them, for I am with you to deliver you, declares the Lord. (Jeremiah 1:7-8)

Behold I have put my words in your mouth.  I have appointed you this day over the nations and over the kingdoms…. (Jeremiah 1:9-10)

Now, gird up your loins, and arise, and speak to them all which I command you. Do not be dismayed before them, lest I dismay you before them.  (Jeremiah 1:17)

Did you get the three prohibitions God gave this young preacher? Do not blame your youth, do not be afraid, and do not get stage fright.

The last is particularly appropriate to some of us.  Get stage fright before your audience, the Lord said, and I will humiliate you in front of them.

God is not honored by false humility in His servant.

Stand up straight. Look your audience in the eye. Speak out strongly and confidently. This is not about you; it’s about the Lord God and the message He has for these people. You are merely the mouthpiece.

There’s the clue to the problem: we think it’s about us.

Preachers–especially young ones–too easily become impressed at the role they are called to play. Standing before scores or even hundreds of people–all of them looking his way and hanging on his every word (they aren’t, but it feels that way at first!)– can be a heady elixir coursing through the young minister’s veins, stronger than the deadliest drug. It blocks all reason, inflates the ego, and warps his perspective on ministry.

That’s one reason most effective preachers are married.

No one brings the man of God down to earth and tethers him to reality like a good wife.

If he is foolish, and let’s pray he isn’t, the preacher will begin to resent his mate for what he feels is lack of support. The very idea of her calling attention to his humanity, reminding him of a misstatement, praying for him to grow.

He may even begin to daydream of some airhead cutie he knew in high school or college who adored him and wonder how much more successful he could be had he chosen someone like her.

This is foolishness of the worst sort. Unless he wakens from this folly, his ministry is down the tube.

It has happened. Far too many times, in my opinion.

Supposing the young minister does awaken and plants his feet solidly on the ground and pulls his head out of the clouds.  Now the pendulum starts to swing the other way. He must be aware of the danger of becoming too enamored by his nothingness.

He gravitates toward Scriptures such as the one in Second Corinthians 12 reminding us that it’s all right to be weak, because “when I am weak, then am I strong” and “I take pride in my weakness.”

I remind pastors of all ages and experience, but particularly young ministers, that you are not nothing. You are an ambassador of the Lord, a servant of the King of Kings.

But neither are you everything. You are a messenger, not the message. You are the servant sent to wash feet and announce the good news.

The reality of your call

Here are four statements that sum up the plan God has for His minister who will be declaring His message:

–First: God called you into this.

–Second: You have searched the Word, spent time on your knees and in your study, and have in your heart and on your mind the message you believe God wants delivered.

If you have not done these things, then do not preach. Call in sick or something. Never enter the pulpit without God’s message.

–Third: The people need what you have come to say.

This is the area where I have fought my worst battles. Once I was five minutes away from bringing a sermon on “the church,” when the thought occurred to me that “these people believe in the church; it’s a Sunday night and they’re here, for goodness sake! Why are you preaching this?” Then, I sobered up. Just because they are here does not mean they know this. And even if they did, a good sermon will drive home the importance of what we already know in a new and strong way, and don’t we all need that from time to time! I recovered and preached the message and God blessed it.

Fourth: It is the will of God that you stand before the congregation in the authority and power of the Lord and give it your all.

Keep saying to yourself that it’s not about you. Keep your focus off yourself and by all means, keep it off the audience. Stay close to the Lord who sent you and who gave you this message to share.

When the Apostle Paul thought of his young protege, Pastor Timothy, serving that flock down in Ephesus, he knew some of the battles the shy preacher was dealing with. Again and again, we hear him calling Timothy to speak up confidently and declare boldly the message of the Lord.

–“Be diligent to present yourself approved to God as a workman who does not need to be ashamed….” (2:15)

–“I solemnly charge you….preach the word, be ready in season and out of season, reprove, rebuke, exhort, with great patience and instruction….” (4:1-2)

Don’t sell yourself short, young preacher. Every congregation on the planet will have critics only too ready to call attention to your shortcomings. Don’t help them. Prove them wrong by your faithfulness.