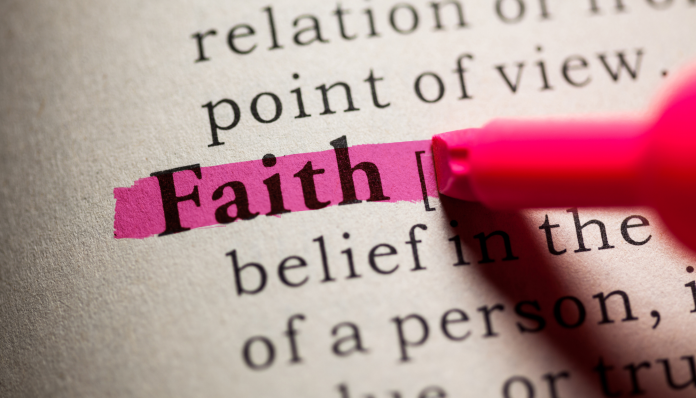 Do you want your flesh to reflect the life of God’s Word? Then let the Word become so infused into your spirit that it becomes a part of you. Not only will His Word become your thought and affirmation… but it will be you. When God’s Word concerning healing takes root in your flesh, it becomes greater than pain, greater than disease, and that Word becomes a reality in your flesh. Seeing Yourself WholeWhen the Word of God is allowed to be engrafted into you, it creates in you an image of what is already a reality in the spirit realm. When you speak that Word from your heart, then faith gives substance to the promises of God. Those images become stronger every time you speak your faith.

A healing image is created in you by God’s Word and your continual affirmation of agreement with what God has said. When that image is perfected by the Word of God you begin to see yourself well. The Word engrafted into you is infusing God’s life into you (John 6:63; Romans 8:11).

This is demonstrated by the woman with the issue of blood, who followed Jesus saying, “If I may touch his clothes, I shall be whole” (Mark 5:28). The verb tense is made more clear in The Amplified Bible, which says, “For she kept saying, If I only touch His garments, I shall be restored to health.”

I’m sure her head demanded, When? You don’t look or feel any better. She answered human reasoning by speaking the faith image that filled her heart; “When I touch His garment, I shall be whole.”

Those words penetrated her spirit and she began to see herself well. Images of despair and defeat gave way to faith-filled words of healing. When she touched Jesus’ garment, her touch of faith made a demand on the covenant of God and the healing anointing which was on Jesus. Faith gave substance to her hope and healing was manifested in her body.

Hope is a goal-setter, but it lacks substance until it is filled with faith. Faith gave substance to her hope and laid claim to what was hers according to the promises of the covenant. Someone said Jesus healed her, but He didn’t even know she was there until He felt power flow out of Him. Then Jesus said, “Daughter, thy faith hath made thee whole…” (verse 34). It was her faith in the covenant that made a demand on the anointing and healing was the result. The Language of HealthThe words you speak are vital to your health and well-being. I believe there are some diseases that will never be cured unless people learn to speak the language of health the body understands. That language of health is the engrafting of God’s Word into your spirit by giving voice to His promises.

Your words become either a blessing or a curse to you. I am convinced from my study of the Word of God that your own words can change your immune system either for better or worse. (See James 3:2-7)

Proverbs 18:21 tells us that “Death and life are in the power of the tongue: and they that love it shall eat the fruit thereof.” In a recent study, men and women 65 and older were asked to rate their health as excellent, good, fair, and poor.

The study showed that those who rated their health as poor were four to five times more likely to die within four years than those who rated themselves as excellent. This was true even when examinations showed the respondents to be incomparable health.

People who have an image of themselves being in poor health will talk about poor health. Even though they may be in good health, they seem to live out the reality of the image they have of themselves even unto death.

Then, on the other hand, I believe that people who continually affirm the Word in faith will build into their immune systems a supernatural anointing that is capable of eliminating sickness and disease in a natural manner.

Now don’t get the idea that I am against doctors. Thank God for medical science and what they can do today. But there are some things that doctors can’t do, because they are limited in their ability.

When taught properly and by practicing the principles of faith, you can grow to the point where it will be a common thing for you to receive healing through the Word of God. Yet, this doesn’t happen overnight. So use some common sense and don’t do foolish things through spiritual pride and call it faith.

It takes time to develop faith to operate in these principles, so don’t let anyone put you under condemnation for going to doctors or having an operation. You must operate on your level of faith, but don’t stay on that level forever. Continue in God’s Word until you develop faith in the healing power of God’s Word.

Confess the promises of God’s Word concerning your health and healing daily. Confess the Word audibly over your body two or three times a day. Confess it with authority. Confessing God’s Word is a way you can fellowship with the Lord and increase your faith at the same time.

Take God’s Word on a regular basis, just as you would take any other medicine. Practice God’s medicine; it is life to you and health to all your flesh and there are no harmful side effects.

Charles Capps is a retired farmer, successful land developer, and an ordained minister operating in the ministry office as a teacher. Since 1973, he and his wife Peggy have traveled all across America and to several foreign countries to share the simple truth of God’s Word to meet the needs of the people.

His ministry has produced a daily fifteen-minute radio broadcast, Concepts of Faith. This program airs on over one hundred fifty stations covering thirty-one states with signal coverage in many others plus Canada. Listeners receive a deeper understanding of the practical truths of God’s Word.

In his books and teaching CD’s, Charles shares first-hand experiences of how Christians can apply a working knowledge of the Word of God to the circumstances in life. They are in demand throughout the United States and overseas.

The Quiet Ones: How (and Why) Introverts Can Help Save the Church from Itself