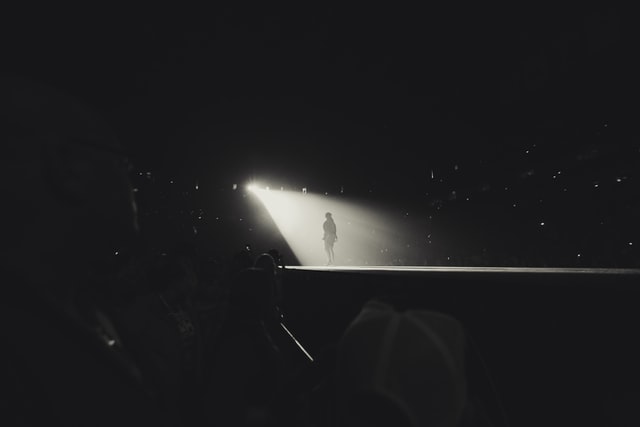 “Always be prepared to give an answer to everyone who asks a reason for the hope that you have.” (I Peter 3:15)

Sometimes you know when your moment is coming but most times you don’t.

One morning ten years ago, I was to be interviewed on a national hookup for Moody Radio. Early that morning, I sat at my breakfast table and thought about doing such things…

For the last week, I’ve had a post-it note beside my computer: Monday. Interview. Moody Radio. 10 am. A reminder to pray for the Father’s presence in this and a prompting to be near the home phone at that time.

It’s not like this is the first time I’ve been interviewed, so it’s not about my having the jitters.

What this is about is the need for a follower of the Lord Jesus to be prepared for that moment when the microphone is poked in his face and he is asked to account for something important.

I recall reading where a consultant was prepping politicians and Fortune 500 big-shots for their moment in the spotlight, for good or ill. Some of his points have lingered with me to this day.

Then yesterday, seeing the CEO of Massey Energy appearing before a Senate committee on C-Span to explain the deaths of the coal miners a few months back in his West Virginia mine brought it all home.

I expect the CEO of British Petroleum has conferred with consultants on how to come across to the public as believable, confident, and yet contrite at the same time. The usual tactic is to admit what you can, explain all you must, but do or say nothing to play into the hands of the lawyers who are lining up to clean out your bank accounts.

As I recall from the article, the consultant told his clients:

–focus on your message. Figure out what you want to get across to the public. Make it brief and positive. Learn it by heart and repeat it to yourself until you can recite it in your sleep.

–forget about the reporter sitting in front of you. This is not about him/her. You are addressing your larger constituency, the American public.

–stay on message. When the reporter asks a question, you are under no obligation to give a direct answer. Keep returning to the message you want to get across.

I recall reading this and thinking, “That explains why interviews with corporate big-shots have always driven me up the wall. They never give a straight answer. If the reporter asks, ‘Is your tie green?’ they will say, ‘I’m glad you asked that; it gives me a chance to get something off my chest–‘ and they’re gone.”

Al Meredith was pastor of Fort Worth’s Wedgwood Baptist Church on September 15, 1999, when a gunman entered the church auditorium where a youth rally was going on and killed seven people before shooting himself. In the hours and days following, Pastor Al was interviewed on television dozens of times by media from across the world.

In 2005, while in Fort Worth to speak in his church, I picked Pastor Meredith’s brain on this event. He said those days were like a blur, everything was happening so quickly. He hardly recalled what he had said. He had been given no time–none–to prepare.

What he had said at that time was magnificent. I watched his interviews from my home in New Orleans and was amazed at the glorious witness coming from him.  I would not be surprised if this well-loved pastor looks at videos of some of those interviews and is in awe himself at the words of insight, compassion, and witness pouring from his lips. The Holy Spirit was on the job.

So when did this pastor prepare for the eyes of the world to be turned in his direction? Answer: that morning when he rose and opened the Word and spent time with the Heavenly Father. When he prayed for the Spirit to guide him that day, to use him, to open his mouth and fill it with His words, to direct his steps.

Most days when he prayed that prayer, nothing momentuous happened. That day, the world changed for him forever.

I watched Don Blankenship, CEO of Massey Energy Company, sitting before the Senate subcommittee Sunday afternoon–it was being replayed on C-SPAN from last Thursday, May 20, 2010–as he sat alongside the last person in the world he wanted to share a table with, Cecil Roberts, longtime president of the United Mine Workers of America (the coal miners union).  A few weeks earlier, 29 miners had died in a West Virginia mine owned by his company. He ended up being convicted of negligence and violation of safety standards and served a one year prison sentence with a hefty fine.

The senators asked Blankenship about the poor safety record, the hundreds of violations of standard safety rules, and the many deaths in his company’s coal mines over the past decade. They would drill Blankenship and then ask Roberts to comment. Interestingly, they addressed each other as “Cecil” and “Don.” But I’m betting they don’t golf together or play pool or watch the big game over at each other’s house.

I grew angry watching Blankenship spouting the same line he had clearly memorized about the fine safety record Massey’s mines had achieved, the awards they have won, the innovative procedures they have in place. “But Mr. Blankenship, how do you explain all these deaths of the miners?” That was his cue to launch back into their safety record and how industry-wide their deaths are no higher than on the average for the number of tons of coal they produce.

Cecil Roberts did not let him get by with that. Again and again, he refuted Blankenship’s numbers and called him down–respectfully, I thought, maybe a little too much so–for his twisted logic.

My father, a lifelong coal miner and yes, a nearly-lifelong member of the UMWA, would not have been able to watch that. (He went to heaven in late 2007.) So I grew angry for him. Here is the CEO of a company known industry-wide for cutting the corners on safety procedures and when his company gets caught red-handed by the explosion that killed twenty-nine miners, he brags about his safety record.

My dad would say this shows why the workers of that mine should have voted to unionize. They had no defender, no one to speak up for them and insist that the company keep faith with the workers. No advocate. The employees had thrown themselves on the mercy of the company and were finding out too late what a bad decision that was.

I suppose Mr. Blankenship had no other recourse than to do what he did before the Senate panel. If he had admitted on national television to being the louse he is (this is not just my opinion!) and putting profits above the welfare of his employees, all the lawsuits against the company would have just been won by the plaintiffs.

What he should have done and should yet do is to resign his position (which he did shortly after this), repent of his sins, and show the world what an honest man looks like. Instead, he shows the world how a corporate bigshot stonewalls and obfuscates and justifies the indefensible.  (In 2018, he ran for Senate and lost, claiming all the while he was the victim of politics. Some people never learn.)

Sorry. Back to the point.

One never knows at what point the world will turn in his direction and demand answers or reasons. A Christian has no way of knowing when he rises in the morning that this could turn out to be the most important day of his life.

A few years back, a young woman in a North Georgia town was suddenly thrust into the spotlight. An escaped criminal burst into her apartment and held her and her child captive, as I recall. When the episode ended and the story came out, the woman gave her testimony. She told how she had talked to the man about the Lord and read to him from one of Rick Warren’s “purpose-driven” books.

Every media person in the country reacted the same. Here was an attractive single woman frightened out of her wits doing something truly courageous. What kind of person is she?

So they started delving into her background.

The reporters found she had a checkered past, as I recall. But she had come to know the Lord and would tell anyone who listened how Jesus had changed her life.

The young woman was an incredible witness. And she had done nothing–absolutely nothing–to prepare for her moment on the world’s stage. She was authentically Christian and the Holy Spirit did in her exactly what Jesus had promised. “Do not worry about what to say or how to say it. At that time you will be given what to say.” (Matthew 10:19)

Her testimony had also catapulted Rick Warren into the spotlight, a place he had already grown accustomed to. And because he seems to stay prepared for whatever the Lord has in store for him that day, Rick was ready and seized the moment.

On ill-fated September 11, 2001, when terrorists took down the World Trade Towers and the four airliners, within hours the media was interviewing every person related to each aspect of this world-shaking event: the families of the victims, the first-responders, architects, politicians, and anyone who had seen anything. No one had time to prepare for the cameras and microphones and the print reporters.

When we know in advance the media is coming–even the Christian media which will be considerate and responsible in its reporting–we are given a gift. We have time to prepare our thoughts on what we want to communicate and time to pray for the Father to clear our minds and use our words.

Even so, we have no way of knowing when we rise in the morning what the Father has awaiting us later in the day. That’s the joy of the Christian life, of course.

And, let’s be honest–it’s the frightening aspect of the Christian life too!

I suspect the Lord intended it to be that way in order to keep us on our knees and looking to Him for guidance and sustenance.

We end with everyone’s favorite text: “Trust in the Lord with all thine heart and lean not unto thine own understanding. In all thy ways acknowledge Him and He shall direct thy paths.” (Proverbs 3:5-6)