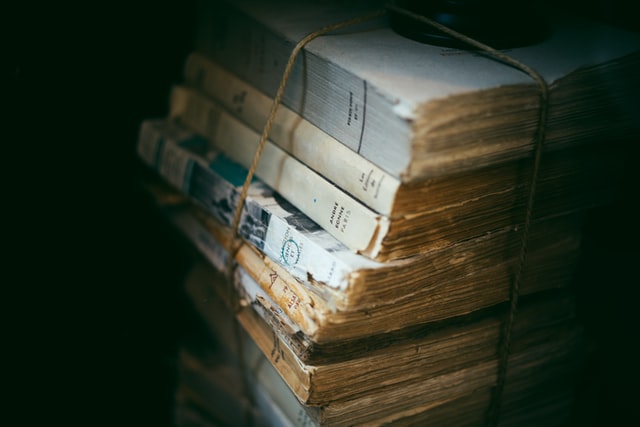 As a pastor, when I use a story found while reading a book 50 years or more older, the one thing I am dead sure of is that no one else is using it.  That’s just one of a dozen reasons I love old books.  Following is something I wrote in 2010 after reading one such book.

I confess. I am a bookaholic, what’s called a bibliophile. New books, old books, it doesn’t matter. Turn me loose in a convention hall where the public library is selling off their excess and I’m in heaven for two hours.

I particularly love the older books.

In Cincinnati, I discovered a used bookstore that filled several floors of an ancient downtown building. I could have moved in.

I know where to find the best used bookstore in Jackson, Mississippi, and in Birmingham, Alabama, and never pass either city without a brief stop-in.

But there is reason to this madness. And it’s far more than a nostalgia kick. (There is that too, but it’s not the major thing.)

Take the 1943 book I finished today. Purchased for 5 bucks somewhere–I forget where–They Call It Pacific is an eyewitness account of the early days of the Second World War from Associated Press reporter Clark Lee.

The book was a delight simply because it was not history. Or perhaps more accurately, it was the best kind of history.  Clark Lee was there, he saw these things and experienced all he wrote about. He reported the conversations, described the people, and let us feel what he felt.

And being a preacher always in search of insights and stories, I received several good sermon illustrations from the book. But more than that, these are “life” illustrations, not just grist for the sermon-making mill.

But first, a little background….

In the late 1930’s and early 1940’s Clark Lee worked out of Japan. He saw the build-up to war first-hand and was friends with a number of government officials and military officers who later became our hated enemies. He escaped the country in November, 1941, just days ahead of Pearl Harbor and full-scale war.

Clark Lee was in the Phillipines when MacArthur was forced to flee and the Japanese captured the country. Along with other leaders, he relocated to the island of Corregidor and went back and forth to Bataan to interview American soldiers who were fighting alongside the Filipinos. Then, as those last bastions fell, he hopped a boat to Australia. He arrived back in Hawaii six months after Pearl Harbor and described the recovery taking place there. Then, he was assigned to an aircraft carrier that took part in the fight for Guadalcanal.

The book ends after the first full year of American involvement in WW II. I found it fascinating on several levels, some of them because of sermon/life illustrations the book provides.

Illustration No. 1 Preparing for Disaster

Clark Lee was working out of Manila as the Japanese were tightening their grip on the Philippines. He keeps track of where they are located, where the U.S. and Filipinos are fighting, and knows what’s going on. That’s why I found this so captivating….

“I went back to the Manila Hotel barber shop and had just gotten shaved and had one hand manicured, when Jacoby (one of his colleagues) telephoned. ‘Get over here as fast as you can,’ he said. ‘We may have to leave at any minute.’”

Don’t miss this. The country is about to fall to the dreaded enemy and you are…getting…a…manicure?

Illustration No. 2 What fear does

The description of fear Clark Lee provides is as vivid as you’ll ever find. He’s on Corregidor and the Japanese bombs are falling from the sky bringing death and destruction.

The bombs didn’t screech or whistle or whine. They sounded like a pile of planks being whirled around in the air by a terrific wind and driven straight down to the ground. The bombs took thirty years to hit. When they were falling they changed the dimensions of the world. The noise stripped the eagles from the colonel’s shoulders and left him a little boy, naked and afraid. It drove all the intelligence from the nurse’s eyes and left them vacant and staring. It wrapped a steel tourniquet of fear around your head, until your skull felt like bursting. It made you realize why man found he needed a God.

Along with the rest of Americans and our Allies, Clark Lee was thrilled at the 1942 victories of our Pacific forces over the Japanese in the battles of the Coral Sea and Midway. These were the first battles lost by Japan in centuries and served as a wakeup call to its leadership.

However, what perplexed Lee was that when these battles were fought, the United States had no more planes and ships than they had had the day after Pearl Harbor. So he wondered: Why didn’t we take the fight to the enemy then? Why had we waited so long?

The answer, apparently, is that the Pearl Harbor attack was a psychological blow to many of our admirals. They had put their faith in those ‘elephants,’ the battleships. Stripped of their battleships they were as lost as a man suddenly deprived of his trousers in the middle of Fifth Avenue. Their instinct was to cover up, to assume the defensive rather than to seek out the enemy for a finish fight. Nearly everyone who saw the Pearl Harbor attack told me that if the Japs had followed up and landed troops they could have taken Honolulu easily. Our aerial defenses had been smashed and there was a great deal of confusion and disorganization.

I remember reading somewhere that when Hitler invaded Russia in 1940, the Nazis were able to win so many victories at first because Stalin was shocked into inaction. It took weeks for him to emerge from that shock-induced coma and rally his people to face Hitler’s hordes.

That happens. It probably explains the federal government’s actions following 9-11, Katrina, and the Gulf oil disaster that is still going on as I write.  (Note: Remember, I said this was written in 2010.)

Leadership is a lot of things and is not easily defined, described, or delineated. But one thing a leader must always do is be prepared for any eventuality. That’s why he/she will continually bombard underlings with questions like:

–“What contingency plans do we have?”

Leadership during times of crisis is golden.  And as rare as diamonds.

Tendencies That Sabotage Our Team Building

The Leader Who Has Never Learned Discipline Is Big Trouble

The Money Series: How Much Should Churches Spend on Their Staff?

The Value of a Mile

The Biggest Failure of Most Pastors

Tendencies That Sabotage Our Team Building

Church Ministries Shawn Lovejoy - January 21, 2021 0
Years ago I got in great shape doing a workout called P90X.  Every day I would allow this maniac fitness guru on the video screen...

The Leader Who Has Never Learned Discipline Is Big Trouble

Church Ministries Joe McKeever - January 20, 2021 0
Now, no chastening seems to be joyful for the present, but painful; nevertheless, afterward it yields the peaceable fruit of righteousness to those who...

The Money Series: How Much Should Churches Spend on Their Staff?

Church Ministries Tony Morgan - January 20, 2021 0
Ministry is all about people reaching people and disciples making disciples. Because of that, it should be no surprise that the largest financial investment most...