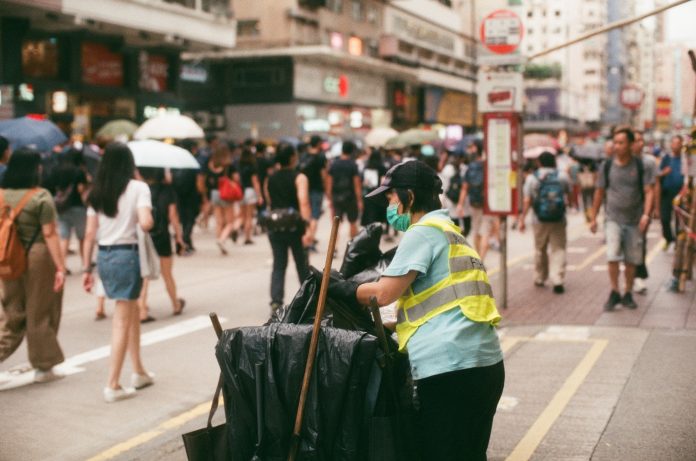 These are days when heroes abound.  Doctors and nurses and support staff wage war against an invisible enemy taking the lives of thousands worldwide.  Equally heroic are the men and women who run the risks of infection in order to drive the trucks and stock the stores, serve the public, and keep us safe. Each is a hero.

When Roland Q. Leavell returned home from the “Great War” in Europe–-i.e.,  the First World War–he had a problem.  People wanted to hear stories of the war, of battles, of heroism. He had none.

Roland Q. Leavell was in his 20s, single, and with a bachelor’s degree from seminary.  He had pastored small churches and had been sent to “the front” as a representative of the YMCA.  In those days, there was no USO to take care of American troops overseas, and fledgling organizations and ministries were still trying to figure these things out.

According to Dottie L. Hudson’s book “He Still Stands Tall: The Life of Roland Q. Leavell,” based on her father’s diaries, Roland did a hundred small things in that war:  He led Bible studies, he counseled soldiers, he ran a canteen, he taught French to a few soldiers, and he drove an ambulance.  At one point, he inhaled poisonous gas the Germans sprayed into the air. The one time he shot a gun was as a joke, pointed into the air across no-man’s-land.  “I guess I didn’t kill over 50,” he remarked in his diary.

And when he got home, people wanted to hear his stories.

Everywhere he went, friends and families expected to hear tales from their veterans, stories of heroism, of close calls, of men sacrificing their lives for the cause of freedom.

“Everyone wanted to hear about the war and what it was like to be in the middle of guns and enemies.  Admittedly, this grew into ‘wild lies’ about the dangers and experiences.  This exaggeration and fabrication became distasteful to Roland.  He had had enough pretense about bravery.  He wished they could talk about something else.”  When he returned home to Oxford, Mississippi, he said, “I know we are in for another siege of talk, talk, talk, but I’ll be glad to see Oxford in spite of everything.”

But here’s the thing.

Andy Rooney, noted CBS newsman and  veteran of the Second World War, said to us in a conference in New Orleans, “You know why soldiers don’t want to talk about their experiences when they come home from the war?  They don’t have any!  Only about ten percent ever fired a gun at the enemy!  The rest were in support–-they were driving trucks, medics, feeding the army, and a thousand other things.”

We’re told that 18 million people died in World War I.  Historians call it one of the most bungled events in history, completely unnecessary, and caused by the tangle of alliances all the countries of the world had entered into in the years prior.  Even so, the country calls and we send our young into battle.

Someone has to do what young Roland Leavell did.

Someone has to do the grunt work.

The principle of I Samuel 30:24 became an accepted rule in Israel.  After David ruled that those who stayed behind to guard the baggage would share the same reward as the warriors who rode on and faced the enemy, “he made it a statute and an ordinance for Israel to this day” (30:25).

I was sketching at a wedding reception in Mobile, Alabama  when my daughter-in-law, financial secretary at a local church, introduced me to Angie and her husband.  “She’s on our church staff,” Julie said.  I said, “What do you do there, Angie?”  She laughed, “I clean toilets!”  Angie  was a church custodian.

I said, “You have one of the most important ministries in church.  Think how awful it would be to come to church and find the bathrooms dirty and smelly.  Scripture tells us that what we do for the church, Jesus takes personally.”

Whether you are mowing the lawn, cleaning the toilets, teaching the children, or feeding the hungry, you are doing it for Jesus.

“Whatever  you do, do your work heartily, as for the Lord rather than for men, knowing that from the Lord you will receive the reward of the inheritance” (Colossians 3:23-24).  After all, “It is the Lord Christ whom you serve.”

Winston Churchill had a problem.  He had to find a way to end a coal miners’ strike at the very time England was fighting for its survival against the Nazis.  Churchill summoned all his reasoning and oratorical powers and addressed the industry  leaders on October 31, 1942.

It’s a short speech and not remembered for any particular Churchillian flourish.  However, in the conclusion, Churchill said this:  We shall not fail, and then some day, when children ask: ‘What did you do to win this inheritance for us, and to make our name so respected among men?’ one will say: ‘I was a fighter pilot”; another will say: ‘I was in the Submarine Service’; another: ‘I marched with the Eighth Army’; a fourth will say: ‘None of you could have lived without the convoys and the Merchant Seamen’; and you in your turn will say, with equal pride and with equal right: ‘We cut the coal!’

My dad cut the coal.  After the bombing of Pearl Harbor, when the nation’s young men rushed to enlist to fight and Dad’s brothers Marion, John L. and Edwyn were accepted, Carl was turned away.  He had three children and a fourth on the way, he was a coal miner and the nation would be needing the coal, he was told.  “Go home and do your job.”

Just outside the front door of the National World War II Museum in New Orleans, bricks on the sidewalk are dedicated to men and women who served this country  with valor during the Second World War.  I bought one for my dad.  It reads: “Carl J. McKeever.  He dug the coal that powered the ships.”

Someone has to stay behind and dig the coal, clean the toilets, and run the canteens.

Someone has to drive the trucks, staff the warehouses, run the garbage pickup, operate the laundries, and serve the coffee.  We thank God for these who are unable to “shelter in place,” as the expression goes, but get up each morning and risk their lives so that life may go on.

Someone has to grade those papers from students now enrolled in online classes.

Let us be faithful in whatever role God has given us.  And while we will sit and listen to others with their tales of glory and conquest, let us not think for one minute that our contributions mattered little.  After all, “it is the Lord Christ whom you serve” (Colossians 3:24).

The Gospel & Class: Communities of Belonging

Inspiration Acts 29 - September 19, 2020 0
Part III: Communities of Belonging: A Strange Family This part of the book has three chapters:

Getting And Staying Healthy As A Leader

Discipleship Joseph Lalonde - September 18, 2020 0
Becoming A Healthy Leader With everything on a leader’s plate, staying healthy as a leader sometimes falls by...