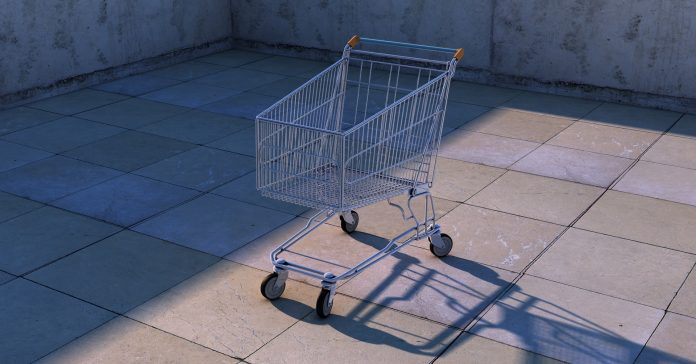 As the world slowly re-opens on the other side of COVID, a question for you today.

Are churches behaving like malls in the age of Amazon, just hoping for people to shop again?

The mall and retail industry, which, pre-COVID, already had its share of challenges and decline, is not in denial that whatever normal emerges from this post-pandemic world,  it will not be kind to retailers.

Sometimes it feels to me like mid-pandemic church leaders are behaving like pre-pandemic retailers, banking everything on people returning once things are normal again.

I’m surprised by the number of comments, messages and emails I get from leaders who assure me that people are just waiting to gather again and everything will be fine.

Well, yes. But not so fast. And not so absolute.

First, of course people are anxious to gather in person again. And yes, actual in-person gatherings and human connection are critical to human flourishing and the mission of the church.

But they’re not the only way you can be the church.

Because crisis is an accelerator, it reveals and amplifies the weaknesses that were already there, and also accelerates trends that were emerging anyway.

It’s amazing to me that despite the fact that virtually every thought leader and business leader I’ve read or have personally spoken to believes that the crisis is a disruption, not an interruption, a surprising number of church leaders still think of the current crisis as merely an interruption.

When you consider what’s been set into motion during the pandemic: from working from home, the rush to digital,  a damaged economy, massive unemployment, the re-emergence of regional governance, deeply restricted travel, the instability of entire industries, and, of course, the virus itself,  to think that life is going to simply go back to the way it was is not a wise bet.

Which brings us back to the question of this post: Are churches behaving like malls in the age of Amazon, just hoping for people to shop again?

Instead of seeing the obstacles ahead of the church, maybe it’s time to see the opportunities.

As much as going fully digital was no one’s choice, we’re here now, and you have a digital presence.

The best question to ask in a disruption is “What does this make possible?”

1. WHILE IN-PERSON GATHERINGS CAN DO THINGS ONLINE CAN’T, THE REVERSE IS ALSO TRUE

There is no substitute for certain things that can only happen in person…and in many ways, no one should be able to out-relationship the local church.

Relationships have gone digital, and so has content.No one should be able to out-relationship the local church. That now includes online.CLICK TO TWEET

And, as this Stanford research shows, people are often more honest online than they are in person.

Why? Well, first, you can be fact-checked online in a way you won’t be in a conversation. If you’re lying, people will google you or your claim and are more likely to call you out.

Second, people may feel safer about admitting their problems via a keyboard than they are in a face to face conversation. It’s harder to look people in the eye and tell them about your addiction or affair than it is to admit it online.

Someone may confess to a struggle on line, which makes (where possible) in-person follow-up conversations in real life even more powerful.

Think about it. You’ve told friends things by text or chat about stuff you don’t have the courage to talk about face to face.

So, paradoxically, the very thing we claim works best in physical gatherings—relationship—perhaps works as well or at times, better, online. Again, I’m not arguing the church shouldn’t gather physically, but to dismiss digital is a mistake.

And  when it comes to content, the church can become far more creative in the experiences and content we share online. From social, to short videos, to interactive services, to showing up every day rather than Sunday, the only limits on how the church can reach out online and do discipleship online are biblical faithfulness and human imagination.

Rebroadcasting what happens in a room for an hour is just the beginning.

It’s like the church has been given a blank canvass to paint on, but we’re afraid to even hold the brush. Or, we just paint the same picture over and over again (something I did when I was seven…but not a good adult strategy).Paradoxically, the very thing we claim works best in physical gatherings—relationship—perhaps works as well or at times, better, online.CLICK TO TWEET

2. EVERYONE YOU WANT TO REACH IS ONLINE

I have heard from literally hundreds of church leaders who keep asking “What about all the people who aren’t online?”

As much as I love the pastoral heart behind that, it’s the wrong focus.

Yes, please call people who don’t have full internet access, or as things open up reach out to them personally in safe ways.

But—don’t miss this—everyone you want to reach is online. The younger the demographic, the more true that is.

3. YOU’VE ALREADY MADE PROGRESS YOU DON’T WANT TO ERASE

Think about where you were in early March 2020.

Now think about where you are today.

It’s not all loss.

The same conditions that are putting troubled retailers like J. Crew under are the conditions under which companies that were positioned for the future are thriving: Amazon, Netflix, and DoorDash are all growing.

Outside of the grace and providence of God, external conditions don’t make or break organizations; leadership does.

Keep building on that. You’re closer to the future than you think.External conditions don’t make or break organizations; leadership makes and breaks organizations.CLICK TO TWEET

4. YOU HAVEN’T TRULY INNOVATED YET

So you’ve made progress, which is awesome.

I don’t want this next point to sound like an insult. It’s not.

But think about it.

In the last 8 weeks, what did you (and I) do? You reacted to something you couldn’t control. You get full marks for that.

But the pivots you’ve made in the last two months aren’t really innovation yet. They’re simply a response to externally-imposed change.

Sure, you’ve done some new things. Everyone has.

But the real innovation curve is just about to get started. When you get some time to reflect, think, respond, pray, imagine and dream, that’s when the real future will open up.

So keep going. The real breakthroughs are ahead of you.

Take all the learning and change you’ve experienced in the last few months and lean into it way harder. Lean into the future much harder.

And when you do, you’ll see and often realize tremendous possibility.

If you’re willing to further rethink your methods, you’ll further advance your mission.

5. IT’S JUST NOT AS BINARY AS YOU THINK

The debate that’s surfacing online about the digital future church is more binary than it needs to be.

It’s not a question of whether church should be physical or digital, or whether digital is just a bandaid to get you back into your building.

The future is both digital and physical.

Retailers were having this debate two decades ago. Most lost. A few won.

If you want an intriguing analysis of the war that’s been going on for decades between retail and e-commerce businesses, the Amazon v. Walmart series on the Business Wars podcast is a fascinating case study.

The discussion and pivoting that shook e-commerce businesses and bricks and mortar business in the late 90s and early 2000s is finally coming to the church decades later.

Interestingly enough, the retailers who have stayed ahead of trends quickly realized that clicks lead to bricks. In other words, the best way to keep their stores growing is to have a killer internet presence.

And, conversely, Amazon is also embracing the ‘clicks lead to bricks’ trend in a fresh way as they open retail locations.

I think in the future there will be more and more digital-only churches who as they grow will foster or open physical expressions.

And the churches that are thriving five years from now will have powerful in-person expressions and meaningful, helpful and robust digital ministry.

As much as everything’s changed, some things haven’t.

My guess is you’re communicating more than you ever have, and in a variety of formats.

I’ve been communicating in front of crowds and alone to cameras for decades. So has Mark Clark, one of the next generation’s most compelling preachers.

Mark and I put the best of what we know about preaching into our online, on-demand course, The Art of Better Preaching.

Every week, Mark and I preach to thousands of churched and unchurched people, Mark at Village Church in Vancouver BC, and me at Connexus Church north of Toronto. We have very different styles, which means this course is not a preach-just-like-me approach to preaching. And both churches are reaching many unchurched people in a thoroughly post-modern context.

You can customize it to help you preach better messages, and it draws from the rich tradition of different approaches that actually connect with unchurched people. Plus, we share our best secrets on how to craft the best messages we know how to create.

In the course, Mark and I cover:

We’re so excited to help you become the best communicator you can be.

Sunday’s coming. Reach the churches and unchurched without selling your soul.

I also have a free blog post series on the current global crisis and how the church can respond:

Avoid This Big Mistake: Stepping Back Into the Past When You Step Back Into Your Building

Half of All Churches Are Instantly Growing. Here’s Why And Here’s What To Do.

The Top 7 Reasons Everyone Ignores the Online Content You Produce

5 Predictions About the Future Church While Everything’s Unknown

How to Lead Through Rapid, Unexpected Change

8 Ways to Lead in the New Digital Default Church

My Top 7 Rules for Leading a Digital Team

8 Early Tips for Producing Digital Content During the Current Crisis

The Three Kinds of Leaders You See In A Crisis

Hope this helps you and your team lead well in a very challenging season.

WHAT DO YOU THINK?

The next year for many churches will be critical. Because crisis is an accelerator, the decisions you make will have a bigger impact than normal.

What are you sensing?