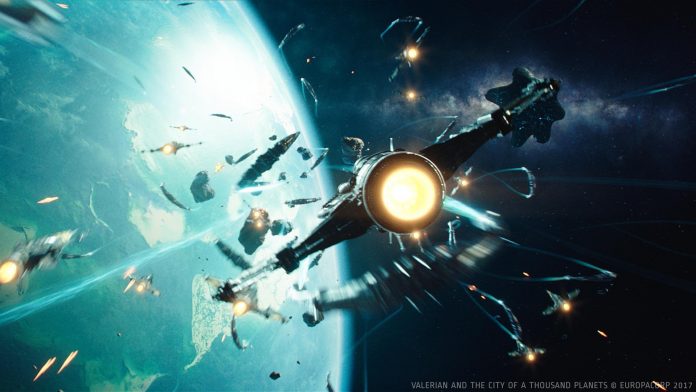 Valerian and Dunkirk released on the same weekend. And I’ve got to say I thought Valerian was the better of the two movies.

While Dunkirk recalled the true (but fictionalized in the movie) story of the evacuation of over 300,000 men, Valerian was the more enjoyable for me. The story of Valerian captured my imagination.

I could picture myself in the city of Valerian. Traveling with Valerian (Dane DeHaan) and Laureline (Cara Delevingne) as they searched for answers and got into trouble.

The imagery of Valerian was breathtaking. Epic scenes of space could make you gasp in awe. The movie was a beauty.

Not only was Valerian a treat for the eyes and soul, there were plenty of leadership lessons in Valerian. Keep reading to discover them all.

1. Organizations can grow too large:

While you may have only heard of Valerian And The City Of A Thousand Planets referred to as Valerian, there’s a reason behind the name of the movie. The city of Alpha was a conglomeration of various space ships that docked. They continued to dock together until the city reached a point it proved dangerous to Earth.

You want your organization to grow. To see increased revenues and staff. But have you thought about what will happen when you do grow?

You need to have a plan ready when your organization reaches critical mass.

Princess Lihö-Minaa picks up a small, dragon-like creature that you soon learn is an item called a converter. The converter will take whatever it is given and make multiple copies of said item.

Basically, the converter is a killer copy machine!

But what the converter did was pretty spectacular. And it’s something leaders should do as well.

Be looking for young leaders you can begin molding to become great leaders. They’re out there and it is your responsibility to replicate yourself and create new leaders.

Admit it, you’re scared of commitment.

Laureline was Valerian’s quasi-girlfriend. She was ready to commit but Valerian hadn’t been ready.

She knew this. And she made a point to call Valerian out on his lack of commitment. She couldn’t be with someone who wasn’t committed to her and her alone.Great leaders need to be committed – Leadership lessons from Valerian

Great leaders are committed to the cause. They know they need to give their all to the organization and lead with a passion unlike any other.

Are you committed to leading well? Don’t be like Valerian. Don’t be scared of commitment.

4. There are things you can’t see:

Laureline and Valerian arrive on Alpha and begin to enter the Big Market. The Big Market is a multidimensional shopping mall containing thousands upon thousands of stores.

To access Big Market, you had to have special glasses and gloves. Without them, you wouldn’t be able to see or interact with the Big Market.

Much like Big Market, there are things you won’t be able to see in the natural. When you look around, things will look the same. But below the surface, things are happening.

Be willing to dig deeper and look further than you believe you need to. There’s something lying beneath the surface.

Yeah, yeah… There’s a time for everything.

Yes, leadership is exactly like Valerian’s quote and the scripture in Ecclesiastes. There’s a time for everything.

6. Running is an option:

After a botched mission in Big Market, Valerian had to make a run for his rendezvous point. There was a problem though. His hand was stuck in Big Market while his body was in the regular world. He could be seen by people in both dimensions!

Valerian’s mission in Big Market was the obtain the last known converter and bring it safely back. When he is noticed, his mark begins to pursue him. He bolts.

Then the stakes get higher. His mark releases a giant guard dog/creature to take Valerian down. Valerian now has to run even faster.

When they see ethical danger ahead, they turn tail and pound the pavement to get away. They know falling into ethical troubles is wrong and not worth the trouble it will bring.

Be a leader who’s willing to run from unethical behavior. Don’t be ashamed of it either. You’re doing the right thing!

Laureline let the converter out of its container. She then began to treat the converter with kindness. She gently touched the creature and spoke soothingly to it.

This put the converter at ease. It began to relax and trust her.

Laureline’s kindness won over the converter.

Kindness isn’t a weakness of leaders. Kindness is a strength leaders need to lean into.

By showing kindness to those you lead, you gain their trust. They begin to know, like and trust you. What’s better than that?

Valerian was fine with the competition he was facing. He knew there would always be someone out there competing with him. And he had to be okay with that.Be fine with competition – Leadership lessons from Valerian

You’re going to be competing with others. And you have to be okay with the competition. They’ll always be there nipping at your heels.

But you can be okay with them. They’re there. You’re there. Learn how to use that to your benefit.

It may be the shortest way but it’s not the easiest.

The options you choose have consequences. Easy isn’t fast and fast isn’t easy. Make your choice.

As Valerian was racing to find the Commander, Laureline was feeding him directions. One of those directions led him outside the safety of Alpha. There, he could have died.

Laureline made a mistake. Then she owned up to her mistake.

Even great leaders make mistakes. They’ll choose the wrong option or team member. Maybe they’ll have a lapse in judgment. Whatever the mistake, leaders make them.

Making a mistake as a leader is okay. The real test of a leader comes in owning up to your mistake.

Valerian, in his attempt to find Commander Arun Filitt, crashes his ship and loses contact with Laureline and the rest of the team. Laureline had a choice. To stay in the safety of the command room or to pursue and rescue Valerian.

Great leaders go after their team members. When a team member is having trouble, they seek them out. Then they seek to understand what is going on.

Be a leader who pursues their team.

12. Your troubles are often your own doing:

You soon learn the reason for the troubles on Alpha is because of something Commander Arun Filitt had done. He’d been willing to wipe out the entire population of Mül to save his own skin.

While he believed all of the inhabitants of Mül had been wiped out, he was wrong. They were able to make their way to Alpha and live underground.

Their emergence was a problem for the Commander. One he had caused.

Most of our troubles spring from our bad decisions. Those decisions come back to haunt us at some point.

Know the reason for your trouble isn’t someone else’s doing. It’s more than likely your own.

Now, own up to it and begin to rectify the situation.

Oh, trying to be cool instead of honest.

Bubble (Rhianna) tells Valerian this as he’s trying to be cool. He’s forgone honesty and wanted to be impressive.

Have you ever done this? Have you ever wanted to be cool and compromised your integrity to be seen as more than you were?

Be careful of this. Your integrity is important.

If you have to choose. Choose to be honest over cool.

During a fight scene in Valerian, Bubble was mortally wounded. She was laying on the ground, bleeding out. Valerian saw this and knew he had to help.

Only one problem. Valerian didn’t know how to help her species. So he did what a great leader does: He asked her for advice.

When you come to a situation where you don’t know the answer, be willing to ask for advice. Find someone who’s been there and done that and get their take on the situation.

Then heed their advice.

Sadly, there was nothing Valerian could do for Bubble. With her dying breaths, Bubble told Valerian to take care of her kingdom and Laureline. She knew Laureline was important to him.Take care of the people closest to you – Leadership lessons from Valerian

There are people in your life you need to take care of. More important than the business you run or the organization you lead is the people at home. Your wife, your children, your grandchildren.

After their planet was destroyed, the Mül took the time to learn everything they could about the ship they were in. Then they continued their quest for knowledge.

Their wisdom grew and grew. Finally, they had a way to recreate their homeworld with all of their accumulated knowledge.

Great leaders are like those from Mül. They are hungry to learn new things.

17. Bad leaders ignore the safety of others:

Commander Arun Filitt, in his youth, didn’t care about the safety of those on Mül. He only cared for his own safety and the safety of his men.

He allowed for their planet to be destroyed. All so he and his men could live to fight another day.

Great leaders don’t do that. They assess the situation and the impact of their decisions on all of those around him. Friend, foe, and unknown alike.

Consider the impact of your decisions on those you lead and those you don’t.

18. Great leaders do the right thing:

Valerian had a choice. He could fulfill his mission and turn over the converter to the authorities or he could hand the converter over to the Mül. It was his choice.

Valerian knew the right thing to do was to hand the converter to the Mül. And he did just that.

Great leaders have to make hard choices. Sometimes making the right choice means breaking the rules or going against another leader.

While Laureline wasn’t directly responsible for the destruction of Mül, she knew the human race was. As such, she was also responsible.

She took the responsibility of their homeworld destruction as something she had done. She approached the Mül people and offered her apologies for the atrocities brought upon them. Next, she offers her help in recreating their world.